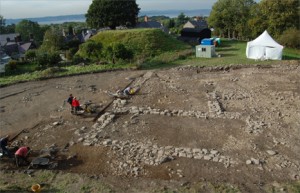 Medieval finds thought to be related to the princes of Gwynedd are on show for the last time.

Excavations at Abergwyngregyn, near Bangor, unearthed the remains of a medieval hall dating back to the 14th century, the period when Llywelyn the Great and Llywelyn the Last were fighting for Welsh independence.

A test dig on the same site in 1993, revealed medieval pottery, a bronze brooch and a coin dating back to the post-conquest era.

“You can see a large area with some substantial walls and the floor plan of a medieval hall with large wings either side,” said John Roberts, archaeologist for the Snowdonia National Park Authority.

“There’s also an enclosure which has features that might relate to industrial activity – metalwork or large ovens.”

A range of evidence links the princes with a number of places in and around Abergwyngregyn, including the mansion on the hill overlooking the village and this site near the motte. The current work adds another piece to the jigsaw.

“There’s good evidence that this is a high status building from the 14th century, which is the time of the princes,” explained John.

“We’re still working on how this fits into Aber’s history, but perhaps we will be able to tell a more colourful story because of this find.”

Experts will be on hand on Saturday to give guided tours of the site and there will be activities for children inspired by medieval games and puzzles.

Next month, the site, which is privately owned, will be returned to pasture.

“If the foundations were left exposed, someone would have to look after them and it’s not a good time to take on such a responsibility at the moment,” said John.

“It’s been nice to see them, but if we want to look after them for the future this is the best solution for the time being.”

The work is the result of a partnership between the Aber Heritage Valley Partnership, Snowdonia National Park Authority and Gwynedd Archaeological Trust, with financial support from Cadw.

Its intention is to open up the history of the area to a wider audience through interpretation and archaeological investigations.

“Abergwyngregyn was one of ten sites in Wales chosen for the £2 million Welsh Cultural Heritage Initiative,” said John.

“The iconic sites selected are key in telling the story of Wales and are strongly linked with our nationhood, language and culture and we hope to make these sites more accessible to the Welsh public.

“The open days are an excellent way of engaging with the local community and telling the story of what has been found so far.”

The site will be open to visitors on Saturday, 30 October, between 10am and 4pm, with children’s activities from noon.