‘Treasures of Heaven’ exhibition at Cleveland Museum of Art 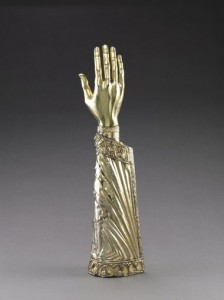 Art museums are victims of their own success, although it’s hard to feel sorry for them. To curry favor at the box office, they’ve convinced a generation of visitors that blockbuster exhibitions are defined by how many Egyptian mummies or paintings by Claude Monet or Pablo Picasso they can corral in one place.

“Treasures of Heaven,” the Cleveland Museum of Art’s big new fall exhibition, is refreshingly different. It focuses on medieval Christian reliquaries from Europe and the eastern Mediterranean, objects often displayed as jewel-like curios but rarely accorded the starring role they deserve.

Organized by the Cleveland Museum of Art, the Walters Art Museum in Baltimore and the British Museum in London, the show is a head-slapping revelation. It makes it crystal clear that reliquaries are central to an understanding of the Middle Ages.

Made of everything from wood, stone and ivory to precious metals encrusted with gems, reliquaries held and sometimes displayed bits of bone, hair, mummified flesh, wood or cloth left behind by Christian saints and martyrs.

The faithful believed that the “holy matter” encased in reliquaries embodied the spiritual presence of a departed saint, who was somehow miraculously both in heaven and yet still on Earth. Through prayer centered on these remains, pilgrims could ask the saints to intercede on their behalf in heaven.

Installed in churches built to house them, relics inspired worshippers to undertake vast and arduous journeys in search of healing and forgiveness. Cities arose around the churches, trade flourished, cultures and languages blended, Christian faith took firm hold, and, it might be said, tourism began.

A small, gemlike painting in the show by the Italian Renaissance painter Gentile da Fabriano sets the scene explicitly. On view in the galleries, it’s also enlarged to billboard scale in the exhibition lobby.

The image shows an imaginary view of a marble tomb of St. Nicholas in the chapel of a church in the southern Italian port city of Bari. Men and women approach the elevated casket holding the saint’s remains.

One man hobbles forward on a crutch. Another, too weak to stand, is carried on the shoulders of companions. A third walks away from the altar with his head bowed in thanks, holding the crutches he no longer needs because he received the healing he sought.

Though most of the 135 works in the show are small, the exhibition is a wide-screen epic. With objects lent from museums including the Louvre in Paris, the Metropolitan Museum of Art in New York and the J. Paul Getty Museum in Los Angeles, the show traces 1,300 years of history from the rise of Christianity in the Roman Empire to the Protestant Reformation. It also traverses a huge range of artistic styles and a vast swath of territory from Ireland to Syria.

Through it all, artists grappled with the central problem of the reliquary: In an age before DNA testing, art itself had to testify to the authenticity of the remains of saints or fragments of the true cross. In a more prosaic sense, artists had to make impressive containers for small bits of sacred material that, in and of themselves, were not much to look at.

The responses to this problem ranged from the simple stone caskets of the Roman era to elaborate Gothic monstrances in which filigreed arches and steeples hold orbs of polished rock crystal containing splinters of bone or wood.

Reliquaries took the form of the cross, miniature Latin or Byzantine churches and miniature altars. They also echoed the shapes of the body parts they contained, whether pieces of a saint’s arm, head or foot.

The show opens with particularly memorable example, a 16th-century Netherlandish reliquary carved in oak and painted to create a startlingly realistic depiction of a beautiful young woman in elaborate golden braids and Renaissance garb.

Designed to hold portions of a skull, the reliquary represents an unknown female saint who was a companion of St. Ursula. Both were believed to have been among 11,000 early Christian martyrs slaughtered by the Huns, whose bones were reportedly discovered in a cemetery in what is now Cologne, Germany, in 1106.

The blond, braided saint gazes out from her vitrine with a Mona Lisa smile and a slightly quizzical expression, as if she were addressing her supplicant with mercy but also with a subtle skepticism.

Many of the objects in the show pack a wallop, despite their small size. A mosaic icon of St. Demetrios gleams with thousands of tiny silver-gilt tiles. Its design, which shows the triumphant saint standing with his spear and shield, is monumental in conception; it could be enlarged to the size of a wall without losing an ounce of its visual power.

As with many shows organized by the Cleveland museum, “Treasures of Heaven” is designed to set masterpieces from the permanent collection in a broader context.

The exhibition does this beautifully, for example, by showing how the museum’s elaborate 11th-century German “Portable Altar of Countess Gertrude,” framed by sculpted gold plaques encrusted with gems and pearls, is actually a reliquary.

For the first time in decades, the tiny relics normally stored inside the altar, part of the museum’s famous medieval Guelph Treasure, have been removed and set tenderly, still wrapped in their original packets of cloth, next to it in a display case.

The exhibition makes a deliberate comparison between the museum’s 12th-century “Arm Reliquary of the Apostles” and the 14th-century Italian “Reliquary Arm of St. Luke,” from the Louvre.

The former, also part of the museum’s Guelph Treasure, encloses the ulna, or lower arm bone, of an unidentified saint inside a gilded silver sculpture of an upstretched arm and hand. The latter, made of sliver gilt and enamel, features a forearm made of rock crystal, all the better to show off its contents.

The curatorial team behind the show, which included the Cleveland museum’s chief curator, C. Griffith Mann, and former medieval curator, Holger Klein (who now teaches at Columbia University), did an excellent job providing points of entry for visitors.

Educational tools include computers set in a reading room, where visitors can explore 360-degree photographic views of churches and shrines from which the reliquaries originally came.

Hand-held devices also provide audio tours, plus video presentations on how the reliquaries have been analyzed and conserved by specialists.

That said, the show asks a lot of visitors, who might feel overwhelmed by some of the more densely written labels.

The biggest problem is lighting. More than a few exquisite objects, especially small engraved caskets and portable altars with vertical surfaces, are cast in shadowy light and rendered difficult to see.

For example, under the existing arrangement of spotlights, it’s hard to decipher the stunning 12th-century Abdinghof Altar from the Diocesan Museum in Paderborn, Germany.

The diminutive work is framed by vertical copper- and bronze-gilt plaques engraved with a spectacle of martyrdom and medieval mayhem worthy of Ingmar Bergman. Yet it’s tough to see the surfaces under the current oblique lighting.

To compensate, I used my notebook as a reflector, bouncing brighter light on the tiny engraved scenes. It helped even more when Mann, the chief curator, who stood next to me beside the display case, shaded the altar from above and blocked the direct but weak light from an overhead spotlight while I used the notebook to wash the metalwork in reflected light from below.

Despite the success of this technique, the museum probably wouldn’t want people walking through the show with white pieces of paper or cardboard so they can illuminate hard-to-see bits of metalwork and engraving.

Mann said that agreements with lenders prohibit the museum from installing reflectors inside display cases. He also said the museum is working on ways to improve the lighting.

Handing out magnifying glasses might be another way to help visitors get a closer look at the intricate workmanship of certain pieces.

Still, despite these complaints, “Treasures of Heaven” is magnificent. It’s a classic type of Cleveland show, an intellectual spectacle that rewrites a chapter of art history.

It must also be said that the show lies well within the museum’s traditional comfort zone. By celebrating the museum’s own medieval holdings, it reflects an area of great strength in the permanent collection and amplifies appreciation for it.

The Cleveland museum has yet to make regular forays into areas of art history in which its collection is notably weaker, especially the 20th century.

It would be terrific if, someday, the museum can regularly focus the same passion and intensity it has lavished on “Treasures of Heaven” on areas that have received less emphasis. Perhaps that will happen under David Franklin, newly installed as the museum’s eighth director. Here’s hoping it does.