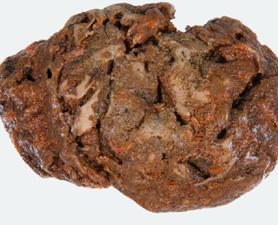 Scientists were able to identify neurons and cerebral cells from the brain preserved from the 13th century.

An international team of researchers has identified intact neurons and cerebral cells in a mummified medieval brain, according to a study published in the journal Neuroimage.

Found inside the skull of a 13th century A.D. 18-month-old child from northwestern France, the brain had been fixed in formalin solution since its discovery in 1998.

“Although reduced by about 80 percent of its original weight, it has retained its anatomical characteristics and most of all, to a certain degree its cell structures,” anatomist and palaeopathologist Frank Ruhli, head of the Swiss Mummy Project at the University of Zurich, Switzerland, told Discovery News.

The brain was the only tissue preserved in the infant’s skeletonized body.

“It is a unique case of naturally-occurring preservation of human brain tissue in the absence of other soft tissues,” Ruhli said.

The brain appeared almost intact. The grooves and furrows — gyri and sulci — that make up the surface of the brain’s cerebral cortex were still clearly visible, as well the frontal, temporal and occipital lobe.

Amazingly, the cellular structure had also been preserved to a certain degree. Microscopic examination of the tissue revealed gray and white matter, blood vessels and large neurons near the the hippocampus area, the memory-making region of the brain.

The cells had mostly retained their original shape as well as the dendrites, the short, branched fibers that extend from the cell body of a neuron.

“It is an exceptional find, as cell structures are identified in preserved ancient cerebral tissues,” Ruhli said.

Indeed, soft tissue decomposition and brain removal as part of the embalming process in most anthropogenic mummies, make it extremely difficult to even find preserved cerebral tissues from archaeological human remains.

According to the researchers, the amazing preservation of the medieval brain occurred because of the burial’s peculiar location.

Wrapped in a leather envelope inside a wooden coffin, with a pillow under the head, the infant was exhumed in Quimper-Bretagne, France. Here acidic clay soil and fresh and briny water (the city lies at the confluence of three rivers amid Atlantic tides) basically preserved the brain like a pickle.

“It’s called adipocere and is the result of a chemical reaction. In the presence of bacterial enzymes, body fats react with water and hydrogen and produce a soap-like substance able to slow down or inhibit decomposition,” Christina Papageorgopoulou, first author of the study, told Discovery News.

The researchers also investigated the possible cause of death of the infant, dismissing a previous diagnosis of a cerebral hemorrhage.

“Heavy bleeding occurred on the outer surface of the cortex at least several days before the child’s death. This is evidence of a skull fracture. Whether it is the cause of death, we can’t say for sure,” Raffaella Bianucci, an anthropologist in the Department of Animal and Human Biology at the University of Turin, said.

According to Maciej Henneberg, professor of anthropological and comparative anatomy at the University of Adelaide, the study is important as an investigations into the evolution of brain morphology and pathology.

“It shows that cell structures can survive for a long time,” Henneberg told Discovery News.