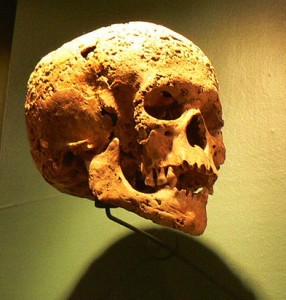 Dozens of skeletons unearthed in London may provide the first solid evidence that syphilis did not sail into Europe with Christopher Columbus and his crew, announced researchers working on one of the largest excavations of skeletons ever undertaken in Britain.

Dug out at the medieval cemetery of St. Mary Spital in East London, the skeletal remains have been at the center of an extensive investigation aimed at shedding light on the lives of medieval Londoners.

Indeed, the researchers examined 5,387 skeletons out of an original sample of 10,500.

“At the end, a total of 25 skeletons with the characteristic changes of syphilis were identified,” Brian Connell, the osteologist at the Museum of London who studied the bones, told Discovery News.

According to the researchers, the skeletons belonged to victims of the disease who lived at St. Mary Spital.

One of the largest hospitals in the medieval period, the site provided shelter for the sick, the poor, elderly and homeless.

Seven syphilitic skeletons, found buried with coins, were radiocarbon dated. The results indicated that the individuals were affected by the disease long before Columbus was even born.

According to Connell, the findings “put the nail in the coffin of the Columbus theory.”

Arguing that there was no syphilis in Europe until Columbus and his sailors returned from the New World in 1493, the theory was supported by a 2008 genetic study.

Kristin Harper of Emory University in Atlanta analyzed 26 strains of treponemes, the bacterial family that causes syphilis, from various parts of the world.

She found that the strain that caused the sexually transmitted disease originated recently, and their closest relatives were strains collected in South America.

The Columbus link was also strengthened by the fact that the first recorded syphilis epidemic in Europe occurred in 1495, three years after the explorer’s first voyage to the New World.

Syphilis was the most feared of venereal diseases. Usually curable nowadays with antibiotics, it ravaged Europe for centuries, working on the victim’s skin, joints, stomach, heart and brain.

Analysis on the 25 syphilitic skeletons showed the terrible bone damage inflicted by the bacterium that causes syphilis, a spirochete called Treponema pallidum.

Among the victims, three were children (one of which was a mere 10 years old), 11 were men, eight were women and three were adults whose skeletons could not be sexed accurately.

According to Connell, the remains of the 10-year-old boy provide the strongest evidence for syphilis.

“In the venereal form of the disease, syphilis is the only one of the three treponemal syndromes affecting bone that can be transmitted from the infected mother to the unborn child,” Connell told Discovery News.

Indeed, the skeleton of the boy, who was born with the infection, showed bony changes that are characteristic of a very late, or tertiary, stage disease.

According to Connell, the remains show highly destructive lesions on the face and skull surface. Swollen infected bones appear elsewhere in the skeleton.

“The destruction of the face and maxilla is so severe that the permanent canine teeth are erupting at a 45-degree angle. They would have caused gross facial disfigurement. This would have been very distressing for the child,” Connell said.

The new findings are going to reopen the heated debate on the origin of the disease, according to Connell.

“We’re confident that Christopher Columbus is simply not a feature of the emergence and timing of the disease in Europe,” he told The Times of London.