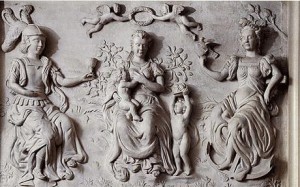 In one of the heaviest raids of the Blitz, on the night of Saturday, May 11, 1941, incendiaries set fire to a remarkable medieval survival in central London: the Charterhouse.

The chapel was saved, thanks to a timely shutting of the door from the cloisters, but the ranges around the quadrangles called Master’s Court and Wash-house Court, which look like the ancient parts of an Oxford college like Merton, were gutted.

Although reconstruction was far from inevitable, these were restored, and their stone and diapered brick walls retain a deceptive air of unchangeable tranquillity. Forty old men live there to this day, as in 1611 Sir Thomas Sutton, the founder of Sutton’s Hospital in Charterhouse, hoped.

Those wartime bombs revealed the hidden history of the medieval priory of Carthusian monks, built here in 1371. Of course, many later additions – a brick vaulted Elizabethan gallery, Jacobean plasterwork (above, showing “Charity”), 19th-century castellated Tudor walls – mix pleasingly with the buildings from the Middle Ages.

Indeed it is shameful to recall that buildings by Edward Blore, the Victorian improver of Lambeth Palace, were cheerfully pulled down in 1951. He was in good company, for a wing that Wren had a hand in was demolished a century earlier.

The detective work of deducing how the buildings appeared in their monastic heyday is compelling. After all, the first architect of the priory was the great Henry Yevele, the master mason who worked on Westminster Abbey and Durham Cathedral.

Part of his 14th-century construction is plainly visible today – the arched stone doorway of a Carthusian monk’s cell, and the hatch through which his food was delivered as he worked and prayed in the isolation of his two-storeyed hermitage.

The central feature of the original monastery was a cloister joining the hermitages of the 24 monks in a square 300ft across. It is neatly depicted on a 15th-century plan of the water supply piped to the cells and monastic church. Yet the location of this church remained hidden until the incendiary bombs fell.

Before that, it had been assumed that the chapel of Sutton’s Hospital filled the site of the old church. The historians should perhaps have thought harder about visible clues, for halfway up the outside wall of the chapel tower, there was plain for all to see a stone-framed hole.

After the bombing it became clearer what this was, when the first-floor room in the tower was being restored. This room, the old Treasury, has lovely Gothic vaulting, from 1512, with bosses carved with foliage, the one in the centre bearing a rose and the monogram IHS for “Jesus”. Beneath the window that the bombing uncovered is the inside of the mysterious hole.

It slopes downward, and is easily identifiable as a squint – an opening in a wall through which the altar of a church was to be seen for purposes of devotion. The squint must have pointed towards the old high altar of the monastic church, as excavations outside the tower confirmed. The present chapel had instead once been the monks’ chapter-house, where they met for deliberations. Today, the outline of the old monastic church is traced on the grass of the courtyard next to it.

Details of these discoveries are told in a splendid new volume in the Survey of London series. The survey is one of the glories of British historical endeavour, having produced in the past 110 years 47 volumes on the buildings of different London parishes, and 18 monographs on prize buildings, of which this new volume, The Charterhouse (Yale, £80) is the best produced.

It also contains new information on the Charterhouse between its suppression by Henry VIII and its refoundation as an almshouse. In those years it was the grand house of England’s richest man, the Duke of Norfolk. But that is another story.