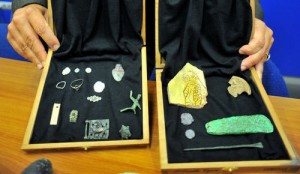 This year’s archaeological digs at the Perperikon site yielded fewer unique finds, but provided more proof of the continued importance of the rock city in southern Bulgaria during the transition from late antiquity to the early medieval times, the head of excavations, Prof. Nikolai Ovcharov said on October 18.

The new finds establish the continuity of habitation and the importance of Perperikon during that era, when it continued to serve as an important administrative centre, as attested by the thick walls erected at some time in the second or third century CE.

It was at that time that Romans began building massive walls to protect major settlements against migrant peoples, mostly Goths, and it is the first settlement with that kind of fortification in the Rhodope region, said Ovcharov, one of Bulgaria’s most renowned archaeologists.

Perperikon’s continued importance as a place of worship is shown by the fact that the fortification was expanded to include the sanctuary of Dionysus or Bacchus, the patron of agriculture and theatre, downhill from the palace area even though breaking the fortifications line made the entire settlement harder to defend, he said.

Roman public works dating to the fourth century CE are proof that Perperikon continued to flourish during the late antiquity. Late Roman architecture has been found dating as recently as the 11th and 12th centuries, when the city was under Byzantine control.

The settlement likely also served as the administrative sight and closest defense point for the nearby gold mines, which fell out of use during the late Roman era, but where extraction was later resumed by the Byzantine Empire.

This year’s finds ranged from a 7000-year-old small wheat grinder, which according to Ovcharov could have been a child’s toy, to 13th century Venetian coins, cut down to smaller size in the 14th century. In total, more than 600 coins were found this year.

One of the rarer ones were coins minted during the early part of the reign of tsar Ivan Alexander, depicting him with his heir Mihail, who died young. Ovcharov said it was further physical proof of the successful, if shortly-lived, conquest of the area by Bulgaria in the first half of the 14th century.

The digs also yielded a Thracian horseman figurine dating to the second or third century CE, a time when the old Thracian horseman imagery was incorporated into cult of Apollo. It was no the first find of its kind, but the one displaying the finest detail yet.

Ovcharov’s team has started this year excavations in the north-east corner of the Perperikon acropolis, the last unexplored quarter of the site. With continued state funding, digs there could be completed within three or four years and the area preserved and ready to open for tourists. This year, the digs received 180 000 leva in funding from the Budget and 40 000 from the Kurdjali town hall.