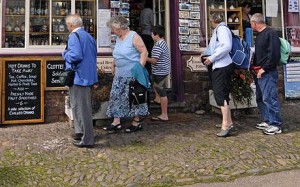 A Somerset village could lose its medieval cobbled paths because they are feared to be too dangerous.

People have been tripping over the cobbles in Dunster’s High Street and suffering injuries, because of their poor state of repair.

Nobody is currently responsible for the cobbles.

The Dunster Working Group has said it wants to re-lay the cobbles but is worried about being sued if anyone falls in the future.

There is evidence of the village being inhabited back to the Bronze and Iron Age. It is now regarded as one of the most-perfectly preserved medieval villages in England.

Dunster attracts thousands of visitors a year because of its 1,000-year-old castle and features including the medieval cobbled streets.

But injuries from tripping over have ranged from a broken arm to a cut forehead and sprained ankles – and they are also the reason no-one will make repairs.

Local business owners are worried about facing litigation if they repair the cobbles themselves, so the Dunster Working Group is considering removing them and laying down a smooth pavement instead.

Its chairman, Paul Toogood, said: “The trouble is nobody is responsible for the pavements, they don’t belong to anyone.

“In an ideal world we would like to lift the cobbles and lay them again, but we have to think about litigation; if someone falls over we could be sued.

“The cobbles on the one side of the street are dangerous, extremely dangerous.

“They have six to seven-inch holes in and we’ve had to call the ambulance five times for people that have fallen over this year alone.”

Dunster was part of the Luttrell family estate until 1951 when it was sold. After the sale the Somerset City Council’s highways department took responsibility for the roads but not the pavements.

Mr Toogood said: “Once the smooth pavement is laid we’d like to hand it over to the highways department to maintain it.

He said the department would only consider taking responsibility if the smooth pavement is laid.

The Dunster Working Group has held three public meetings to gather feedback from residents and Mr Toogood said most were in favour of laying the pavement, but this was all subject to finding £60,000 to £70,000 of funding.