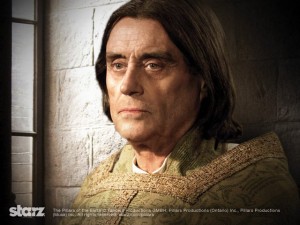 Ian McShane is justifiably proud of his hair. The 68-year-old actor is sporting long, dark, glossy locks and a matching beard for his latest role as Blackbeard in the much-anticipated Pirates Of The Caribbean 4.

With such a full head of hair, it’s understandable why he refused to have a circle shaved into his crown for his part as a priest in the Channel 4 adaptation of Ken Follet’s medieval best-seller Pillars Of The Earth.

“The producer said, ‘It’ll be three months in Budapest and you’ve got to shave your head’. I said, ‘No’. I had a tonsure fitted instead, which sat on top of my head and they combed my hair over it.”

The epic new drama about political struggles and the building of a cathedral in the Middle Ages, comes courtesy of Robin Hood and Gladiator director Sir Ridley Scott, whose production company wanted to do Follet’s 1989 book justice with an eight-hour TV adaptation.

“This is such a popular book and always has been. It’s still on the best-seller lists in America, and the Middle Ages never go out of fashion,” says McShane, running his hands through his hair.

McShane plays Waleran Bigod, the devious Archdeacon of Shiring, who believes it’s God’s will that he becomes Bishop – and won’t let anything stand in his way.

The actor would rather think of Waleran as “complicated” than downright evil.However, “There was a line in Ken’s book, which says he looks like a raven – and I wanted that look about him. He’s very much on a par with someone like Judas Iscariot. He can’t open his heart, he can’t open his head, but he’s very intelligent.” Waleran’s arch-enemy is the highly moral Prior Philip (Macfadyen), who the Archdeacon tricks into helping him become a Bishop.

While Philip wants to rebuild his run-down church as an inspiring cathedral, with the help of Tom Builder (Sewell), Waleran selfishly wants to build a palace for himself and the pair come to blows.

“His objective in life is to prevent Philip from ever succeeding in building his cathedral,” says McShane. “Waleran is more of a PR man of God, whereas Philip is a man of God. I believe Waleran sees the church as a business, not a calling.”

Yet, behind his self-interested demeanour, Waleran has a moral conscience and soothes his pricks of guilt by whipping himself.

“We did all the flagellation scenes over one day – Flagellation Day,” jokes McShane. “It’s the only way he takes pleasure and at the same time relieves himself of all his guilt.”

It took four hours in make-up for the scars to be applied, but McShane’s philosophical about the pain he took for the role: “As long as the cheques come in, it’s all good.”

While on British TV screens, McShane is best known for playing roguish antiques dealer Lovejoy, on the other side of the pond, his portrayal of ruthless brothel owner Al Swearengen in the lavish 1870s-set HBO drama Deadwood made him a star, won him a Golden Globe in 2005 – and has seen him cast increasingly as the villain.

“I think there are enough goodies about,” he says, eyes twinkling with mischief.

“I’m doing Blackbeard now, who’s also a ‘complicated’ character, with a complicated beard, which takes two and a half hours to make up.

“The devil gets the best tunes usually, so over the past few years it’s been terrific.”

McShane was born in Lancashire, the son of footballer Harry, who played for Manchester United.

He’s close to his parents and credits them with giving him enduring good looks.

“It’s in the genes I think. Dad isn’t too well at the moment, but they’re still going strong.”

He trained at RADA, after realising he wasn’t good enough to follow his dad’s sporting footsteps and won his first film role in 1962, aged just 19, opposite John Hurt in The Wild And The Willing.

The early success proved too much – he drank heavily and had two failed marriages, as well as two children, before meeting his third wife, American actress Gwen Humble in 1981.

Today he lives in the States but is relishing the opportunity to spend some time in England with his three grandchildren, while he’s working on the new Pirates film with Johnny Depp.

“It feels like we’ve been filming it for three years; we were in Hawaii for two months, LA for a month and now here for two months.

“I miss Saturday mornings in America, because they show five Premiership football games one after another on Fox. But when I’m there, I miss being able to go to live football matches and seeing my grandkids and children.”

Despite a 48-year career on screen, McShane says he’s constantly pinching himself over his good fortune.

“I’m always amazed by it. When you’re doing a medieval show like Pillars, it starts off a bit like a school play. You’re all in funny costumes, you’ve had your coffee and you say, ‘Good morning’. Then you go on set and, if you’ve got good actors and directors, it takes on a life of its own.