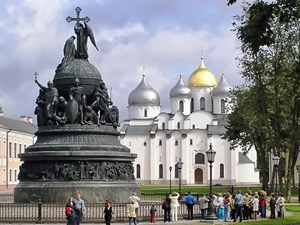 Velikiy Novgorod, one of Russia’s most ancient cities, with over a millennium of history, is known as the cradle of the country’s democracy.

Lying 500 kilometers north-west of Moscow, Velikiy Novgorod is of major historical interest. Today it is a rather small city, but there was a time when it was the capital of a trading empire that spanned from Finland to the edge of Siberia.

In Medieval times, it was a European-wide trading center and also a freedom-loving republic unlike almost anywhere else in Russia.

Local authorities are now trying to capitalize on its history. They want to attract more visitors, make them stay longer and spend more money.

Apart from the tourists, there are those who gather in the city every year to celebrate the past and reconstruct the dramatic events it witnessed.

“We are the army of the Ruler of Novgorod from the height of its prosperity. Many people have forgotten, but we are keeping the memory alive,” said history enthusiast Aleksey Bozhunov.

Russia’s oldest Slavic city, Novgorod was founded more than a thousand years ago.

Centuries before St. Petersburg, it was Russia’s gateway to the West.

Novgorod filled the whole of Europe with furs and candle wax, becoming one of the most prosperous cities on the continent.

It was not just the heart of a powerful trading republic, but possibly the birthplace of Russia’s democracy.

At the sound of a bell, the city population assembled on the main square.

There, they voted on the most important issues facing the Republic.

A new ruler was elected after an old one died. Each part of the city had its own self-government. Military commanders were invited from neighboring states.

“Novgorod offers a glimpse of what an ancient Russia might have been like. Instead of authoritarianism, there could have been freedom and democracy,” explained historian Sergey Troyansky.

But it was not to be.

Moscow princes, keen to get their hands on its riches, brought the city under their complete control, and even carted away the assembly bell.

In 1570, Novgorod became the setting for one of the bloodiest chapters in Russia’s history.

“When Ivan the Terrible came for a visit, a feast was laid on for him. Then, just as the guests were getting drunk, he suddenly got up, and banged his staff on the floor. That was the signal for his henchmen to round up the citizens of Novgorod and to begin torturing them. For two weeks, a thousand people were killed a day. The legend says our river is reddish in colour because of all the blood that spilled into it,” explained local journalist Sergey Gormin.

Before World War II, the Soviet authorities melted most of the enormous bells whose unique peal chimed across the city from St. Sophia Cathedral, Russia’s oldest church.

Their chorus still haunts Vyacheslav today, who dreams passionately that it might one day return.

“We have all the blueprints. If only we had the money, we could rebuild them exactly as they were. My one dream in life is to hear St. Sophia’s bells ring out over the city again,” shared bell ringer Vyacheslav Volkhonskiy.

Like the whole city, Vyacheslav has to be happy with what he has got, and living with hopes of a rebirth of past glories.

Simon Richmond, coordinating author of Lonely Planet guides for the whole of Russia, believes Veliky Novgorod has a lot to offer visitors. He said besides the old citadel, the town is full of picturesque churches, making it very appealing to tourists.

“The other special thing about Novgorod is they are very tourist friendly, which is quite unusual for a Russian town. They have a fantastic tourist office where they are very happy to help tourists,” said Richmond.

“The price of hotels is not that expensive. If you are on a budget the tourist office will help you to find a room in someone’s home and that is a great experience for foreigners to have,” he pointed out.

“It is near midway between Moscow and St. Petersburg and it offers a completely different atmosphere. And I think it’s a good place to visit,” Richmond concluded.