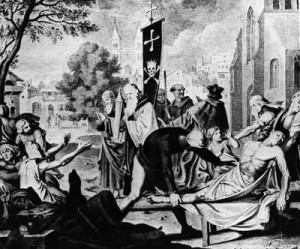 Anthropologists said on Friday they had confirmed long-running suspicions that a germ called Yersinia pestis caused the plague that wiped out an estimated third of Europe’s population in the Middle Ages.

Teeth and bones sampled from 76 skeletons found in “plague pits” in France, Germany, Italy and the Netherlands and sequenced for DNA intrusion are conclusive evidence that Y. pestis was to blame, they said.

Y. pestis has been in the dock for more than a century as the source of so-called Black Death, which gripped Europe in successive outbreaks from the 14th to the 18th century.

But scientific data to convict the bacterium have until now been sketchy or debatable.

As a result, a clutch of rival theories have blossomed, including the contention that an Ebola-style virus or the anthrax germ were to blame.

The study, published in the open-access journal PLoS Pathogens, also sheds unexpected light on the geographical route taken by the germ, which is believed to have originated in central or southern Asia before arriving in Europe through trade.

“The history of this pandemic is much more complicated than we had previously thought,” said Stephanie Haensch, a co-leader of the research, at Johannes Gutenberg University in Mainz, Germany.

In samples where Y. pestis genes were found, the researchers ran a test for 20 DNA markers to identify a particular bacterial strain.

They wanted to see if there was a match for either of two types of Y. pestis that are still knocking around the world today, in parts of Africa, America, the Middle East and in the former Soviet Union.

But neither of these modern types, known as Orientalis and Medievalis, showed up.

Instead, two unknown types were found, both of them older than today’s strains and different from each other.

The map of Y. pestis’ death march in Western Europe starts in November 1347, presumably driven by fleas living on rats which crept onland from a merchant ship docked at the Mediterranean French port of Marseille.

Over the next six years, it then spread through western France to northern France and then over to England, again through commerce.

However, a different strain was found in a mass grave in Bergen op Zoom, a port in the southern Netherlands.

This suggests Y. pestis also entered Europe from the north, perhaps from Norway and via Friesland, a northern Dutch province.

After the initial surge from 1347, the pandemic progressively spread around the continent, inflicting a toll that had massive social and political repercussions.

“Our findings indicate that the plague travelled to Europe over at least two channels, which then went their separate ways,” said fellow investigator Barbara Bramanti.