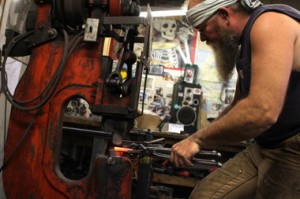 “I’m working in a craft that has been going on for a thousand years,” said Klug, 49, as he twisted molten hot metal with tongs. “I’m not kidding when I tell my students, ‘Strike when the iron’s hot,'”

Together, Klug and Shewchuk, 45, are White Hart Forge, a blacksmith shop created out of a two-car garage space at the married couple’s home just south of Milwaukee. They hand-wrought medieval and Viking-style ornamental and architectural pieces to the delight of history lovers worldwide.

Recently, they shipped pieces to historical re-enactors in France, Australia, Spain and Iceland.

Their work ranges from $2,500 iron Celtic wild boar sculptures to $15 brass kilt pins. Fireplace screens are their most popular item, ranging from $500 to $3,000. An elaborately designed fireplace screen can take months to complete. Handrails are another popular sale. They go for $100 per foot.

The Sons of Norway Grieg Lodge in Northeast Portland commissioned a medieval-style dragon-themed gate. Lodge president Julie Whipple was so impressed by the work that she put in a personal order, a fireplace screen with dragon motifs.

“This kind of custom design is worth the money,” Whipple said. “And we’re supporting a local business.”

Klug, a Portland native, was turned on to ironwork in the 1970s as a student at Benson Polytechnic High School. After putting in 15 years as an archeologist and researcher for the Bureau of Land Management, he decided it was time to pick up the forge tongs.

His federal job was “the most amount of money for the least amount of work,” Klug said. “Now it’s the other way around.”

Klug ran his first smithy from a pushcart out of Sisters. He wheeled his shop around central and eastern Oregon for exhibitions and workshops at period fairs. He met Shewchuk in 2000 at a Celtic fair in Eugene.

Shewchuk is an ironwork hobbyist who studied metal sculpture at Pratt Fine Arts Center in Seattle and who, like Klug, is a dedicated historical re-enactor. The couple’s spark kindled immediately, and they moved in 2001 to Oak Grove, south of Portland, “where we could make a lot of noise.”

Both Klug and Shewchuk look the blacksmith part.

With a Paul Bunyan beard, white headband and cut-off Carhartt tee, Klug seems as if he should be perpetually wielding a mallet hammer. And Shewchuk, twining black and gray hair and leather apron, could have just anchored a Viking ship.

“This community gives support to artisan enterprises,” Heying said. “There’s the infrastructure here to support them in every arena. There’s a certain social wealth. People here live on less, and support neighborhood businesses.”

Judy Reese, 49, of Portland asked the company to make a custom trellis four years ago. Since then, White Hart has made Reese two gates, two rose trellises and a basement handrailing – of all which include iron beetle detailing. She wasn’t interested in buying mass-produced items from a catalog because they are, by her account, mostly tacky designs.

Klug and Shewchuk are as fastidious about the details of their trade as they are passionate about the lore.

“They used photographs they’ve taken in Bavaria to perfect the sign,” said restaurant owner Shaun Rottner. “The thing is 125 pounds and was wrought by both of them and painted by Heidi. The result is incredible. It was quite the buzz when it went up.”

Jewelry designer Randy Bennett, 36, who owns Uniquely Stranded, a jewelry store in Grand Haven, Mich., came to White Hart four weeks ago for three days of forging classes. His said his jeweler’s files and saws are not suitable for manipulating steel, so he had to order pieces from a blacksmith in Springfield, Ill. He said Klug has advised him in creating his own garage forge, which he hopes to complete next week.

“Learning to do something for yourself is not only empowering, it makes you feel like you’re connected to something,” Klug said.

“I don’t think I’m a mover and shaker,” she said. “But if I can handcraft a chandelier for a local client with complete artistic freedom, then I’m thrilled.”

Ancient craftsman setting up business on Isle of Man

The 7 Fiercest Gauntlet Gloves of the Medieval Times