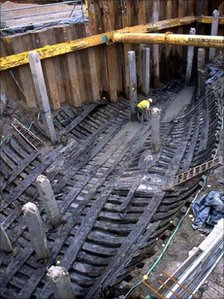 Campaigners say they are concerned that there are still no permanent plans for a medieval ship discovered on the banks of the River Usk in Newport in 2002.

The vessel has been called the world’s best example of a 15th Century ship.

As conservation work continues, campaigners say they are worried it could end up hidden in a warehouse.

Newport council say they would like to put it in a new museum but the project will need national and international support.

The medieval remains were discovered on the banks of the River Usk as work began on the foundations of a new theatre complex.

Since then years of painstaking work on assessing and conserving some 2,000 timbers which made up the vessel has gone on, and now the work, at an industrial estate building in the city, is at the preservation stage.

Once complete, the ship which it is now believed to have originated in the south of France, will be some 25 metres long, the length of an average smming pool.

Jane Grey, treasurer of Newport Ship, said the group wants some idea of where the ship will end up eventually.

“Once the preservation and conservation process is complete our big fear is that we will still be in a financial slump and the funds won’t be there to house it in a museum and it’ll be stuck away in a warehouse somewhere.

“That would be our biggest nightmare.”

Ffion Lloyd, from Newport council, said the project was a huge one.

The vessel has been dismantled and digitally remastered, with the help of Welsh Assembly Government and Heritage Lottery Funding, and now they are in the conservation phase.

She said they would like to rehouse the ship in a new museum, alongside other artefacts charting the city’s history.

However, she added: “Of course, at the moment public finances across the UK are very tight.

“So while it’s our aspiration for the future to have a new museum and to have the ship in it there is no funding in the place at the moment but in the future we will continue to look to see if we can achieve that dream.

“When we first found her we found Portuguese coins on board. At that point we were quite pleased with our theory that it came from the Iberian peninsula.

“But as we’ve taken the timbers apart to preserve them we’ve found a small French coin. That was put their deliberately into a recess. It’s a strong clue that the ship was built in France.”

Norway couple find Viking grave under floor of their house

Norfolk discovery of 1,100-year-old brooch ‘will remain a mystery’