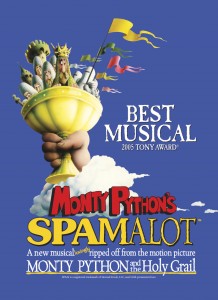 Flying cows, killer rabbits, taunting Frenchmen and show-stopping musical numbers are just a few of the reasons audiences everywhere are eating up Spamalot.

Spamalot is described as a musical comedy lovingly ripped off from the 1975 film Monty Python and the Holy Grail. The musical opened on Broadway in 2005 and has toured extensively throughout North America.

It’s award-winning, non-sensical hilarity and it’s coming to The Playhouse.

Spamalot is described as a musical comedy lovingly ripped off from the 1975 film Monty Python and the Holy Grail. It opened on Broadway in 2005 and has toured extensively throughout North America.

Like the film, it’s a highly irreverent parody of the Arthurian Legend, but it differs from the film in many ways, especially in its parodies of Broadway theatre.

Eric Idle, a member of the Monty Python team, wrote the musical’s book and lyrics and collaborated on most of the music.

In a telephone interview with The Daily Gleaner while on this Spamalot tour, cast member John Garry talked about the show. It’s as goofy as any other Monty Python offering, he says.

Garry’s parents weren’t fans of this British comedy group and their work but he has become a big Monty Python fan since getting to know this production and the characters he plays in it.

“I think part of the hilarity of Monty Python is that it is non-sensical. That’s where its humour lies. It’s like taking societal norms and flipping them upside down on their heads. It’s what I found funny about it as a kid and it’s what makes it funny today. I am actually more of a fan now that I’ve been doing the show because I’ve been going back and looking at the sketches that Monty Python originally did.”

The stage show starts with a historian who gives a brief overview of medieval England. But in true Monty Python-style, there’s an apparent and intentional miscommunication between the actors and the narrator and an idyllic Scandinavian village appears.

The now irritated historian returns and explains to the others on stage that he was talking about England, not Finland.

Immediately the Finnish villagers leave the stage and the scene is replaced by a dreary, dark village with hooded, Latin-chanting monks.

Next King Arthur, along with his servant Patsy, searches the land trying to recruit Knights of the Round Table to join him in Camelot.

Along the way they encounter many other characters who add to the comical farce.

Garry plays two characters in this show. One is Not Dead Fred, whom he describes as a plague victim who has not yet died and who desperately doesn’t want to be thrown onto a wagon filled with other deceased plague victims.

“Not Dead Fred is on for a scene and then he sings a song. He is fighting with all of his might to make sure nobody puts him on the cart.”

His other role is that of Prince Herbert. He describes him as a young and rather flamboyant, flowery lad who pines for love atop a tall tower.

As part of the quest for the holy grail, Sir Lancelot receives a letter from what he assumes is a young damsel in distress.

He’s very surprised to find that the damsel is actually an embarrassingly effeminate young man named Prince Herbert whose overbearing, music-hating father, the King of Swamp Castle, is forcing him into an arranged marriage.

As Herbert asks Lancelot to help him escape, the King of Swamp Castle cuts the rope that he is using to climb out of the window, and Herbert falls to his death.

Lancelot is a bit puzzled at the king’s actions, but it’s revealed that Herbert was saved at the last minute by Lancelot’s sidekick, Concord.

“Prince Herbert is my favourite character to play in the show. He’s really fun.

“There’s a song called His Name is Lancelot that I really love. It’s very funny, it’s very gay so it’s lots of laughs.

But my favourite part to watch is a section called the Laker Girls where the Lady of the Lake is first revealed. It has a huge Laker Girl dance which mimics the basketball cheers.”

King Arthur and five Knights of the Round Table gather in Camelot which looks a lot like the Las Vegas’s Excalibur resort, complete with showgirls, oversized dice and more. In the middle of their revelry they are contacted by God who tells them to locate the Holy Grail.

The knights set off and the show continues with all sorts of twists and turns very similar to the Holy Grail movie.

This production started at the end of September. The cast has done a show every day except Sundays. It’s a very demanding schedule but Garry says the cast and crew are having a lot of fun.

“Monty Python is funny. You can’t help but laugh when other people are on stage and you are watching from the wings.

“Everything in the show is so fun to do I don’t see myself getting tired of this any time soon.”

That’s a good thing because this tour is booked with dates until June 2011, with the possibility of an extension. It’s a great thing to know that there’s that much work ahead, he says.

If you decide to see this show, Garry says, come prepared to laugh and leave with high spirits.

“It’s about having a good time so be prepared to have fun.”

What: Winner of the 2005 Tony Award for Best Musical, Monty Python’s Spamalot tells the tale of King Arthur and his Knights of the Round Table as they embark on their quest for the Holy Grail.
Where: The Playhouse
When: Oct. 14-15 at 8 p.m.
Tickets: $75; $60 for students; $65 for members. For more information contact the box office by email at: boxoffice@theplayhouse.ca or phone 458-8344.