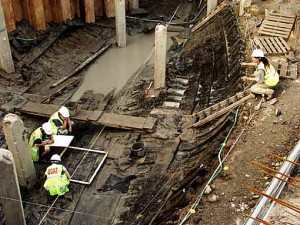 A small French town’s fascination with all things medieval has help strike up a friendship with supporters of Newport’s 15th century ship.

“And ‘strike’ is the operative word” says Councillor Charles Ferris who set up his mini-mint in the little town of Cremiere near the Swiss border.

“The townspeople were delighted when I started to turn out replicas of coins that were struck in Cremiere over 550 years ago.”

The Newport councillor and leading light in the Friends of Newport Medieval Ship has so far raised over £12,000 for the project by striking replicas of a coin that was found wedged in the ancient vessel’s timbers.

“If you’re going to do something you should do it properly.

“Every chance I get I set up my little mint, dress up in the clothes of the period and knock out replicas of the petit blanc I’m there.

“We knew that the coin found in the ship was minted at Cremiere around 1447 when Louis XI of France was still Dauphin [prince].

“We also knew that the town which only about the size of Caerleon village has a marvellous medieval fete.

“The locals dress up in elaborate middle ages costumes. Even those who don’t want to spend a lot of time and money on their outfits can join in” he said. “They go as lepers.” He added.

“We had quite a bit of fun. I gave the two-fingered salute with which the British bowmen taunted the French at Agincourt while a new-found friend replied with the crossbowman’s riposte which is an extended trigger-finger.”

“When I said I could enter into the spirit of things by striking my coins I was invited to Cremiere by the mayor Mr Alain Moyne-Bresssand and to stay in the home of Mr and Mrs Zahi who live in the very place where the old coin was minted.

“People are delighted that one of the coins struck in their town made it to Wales all those years ago.

“They are so interested in our medieval ship that they have prepared a booklet about it and it is being included in the curriculum of one of the local schools.”

The Newport Medieval ship was uncovered largely intact when footings were sunk for the Newport Riverfront 10 years ago.

It has since been dismantled and the timbers preserved prior to possible re-assembly.

The petit blanc from Cremiere was among other finds which include clothing, footwear and a comb.

It is hoped to eventually show the ship and other artefacts of local interest such as those connected with the Chartists in a purpose-built museum.

“The Newport ship is of international importance to marine archaelogists who see it as up there with the Mary Rose” Councillor Ferris, who travelled with his wife, Ann, said.

“What’s nice is when ordinary people cotton on to its romance.”