Ancient bones could be medieval nun 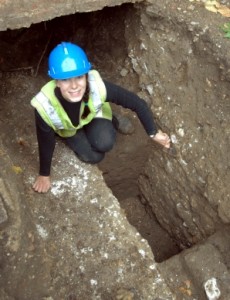 An archaeologist digging in a building site next to Reading Minster has unearthed a skeleton in what she thinks is a medieval grave.

The find was made as builders began their work on a site owned by the Oxford Diocese behind the Allied Arms pub off St Mary’s Butts.

Because the site – formerly garages and a car park – is so close to one of Reading’s most historic buildings, an archaeological investigation must take place as the builders start their work.

Two weeks ago archaeologist Diana King dug out a small inspection trench and found the skeleton.

She explained: “We were able to establish that it was an articulated burial, that is one which had not been disturbed before.”

She said pottery found in the area suggested it was a medieval grave.

The grave has been covered up but further archaeological work on the grave and the site will continue.

Mrs King, director of Foundations Archaeology, said: “More interestingly we have uncovered parts of a medieval wall which can still be seen.”

Area Dean of Reading, Canon Brian Shenton, in charge of Reading Minster of St Mary the Virgin – one of the town’s few Grade I-listed buildings – had hoped the skeleton would prove to be both Saxon and female.

He said: “There was a convent on the site in Saxon times before the Minster was built and that might have meant the skeleton was one of the nuns.”

However, Mrs King said so far all the findings in the small area under investigation were medieval.

She added: “Of course that does not mean we might not find something older.”

Mrs King said: “We should know more in a couple of weeks.”

Cornelius Kavanagh who works for Hives Architects based in Reading and is working on the development said: “The plan involves the demolition of garages and the building of a commercial shop on the ground floor and two flats on top.”