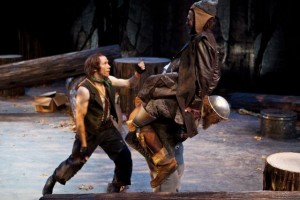 The pre-show begging for change was a little nervous-making at Friday’s opening of Greg Banks’ audience-interactive “Robin Hood” at the Children’s Theatre. But the preamble served to ground this contemporary retelling of the medieval story in its hardscrabble milieu.

The pre-show has some clever bits. In one, actor Reed Sigmund wears a leash on one foot as if it were a frisky puppy: It suddenly darts away from him, pulling him along. It leaps on seats, startling nearby theatergoers. It retreats in the face of a threat, cowering as Sigmund gives voice to its whimpering.

Sigmund is part of a small cast of four principals whose big performances fill out the Cargill Stage with the fight for justice and fairness. Dean Holt plays Robin. Julian McFaul is his antagonist, the Sheriff. And Anna Sundberg, who plays Maid Marian and Much, rounds out a cast that is sometimes augmented by accompanying musician Victor Zupanc.

Director Banks, who also adapted “Robin Hood,” has a knack for reinventing classic stories. His promenade-style “Romeo and Juliet” at CTC, for example, was a stripped-down cascade of passions that gave visceral immediacy to the story of doomed young lovers. His adrenaline-filled “Antigone,” also done promenade-style for CTC, made the Greek tragedy a whipsawing saga.

This one-act “Robin Hood” is similarly telescoped. Although it does not diminish the class conflict between the haves and the have-nots — Robin, after all, robs from the rich to give to the poor — Banks makes sure that we know the motive. The natural order is corrupt, lorded over by the Sheriff, a vile figure who is the representative of usurping ruler Prince John. In this context, Robin is a wealth redistributor.

The principals all do beautiful work in this energy-charged staging that includes acrobatic, somersaulting fighting. Sundberg makes a splashy Children’s Theatre debut as Maid Marian. Taut and deft, she veers between Marian’s comely femininity and assured strength. She also plays a sympathetic Much, whose father was one of the Sheriff’s victims.

Holt’s Robin is a playful, happy-go-lucky fellow who would probably rather be dancing than fighting. And when he does do battle — on a bridge with Little John, on a log with Marian — it is expertly executed and with a good sense of humor. It is clear that he means no harm.

McFaul’s Sheriff is clearly drawn even if there’s no empathy for such a villain.

For my money, this is Sigmund’s show. He has many roles and does them with aplomb. His Prince John is sort of a medieval Richard Simmons, a little fey and totally self-absorbed as he is wheeled out in his pramlike metal washtub. Sigmund’s Will Scarlett is first cousin to an argh-ful pirate. And his Little John is a towering Paul Bunyan-esque strongman — a display of strength that applies to the whole production.