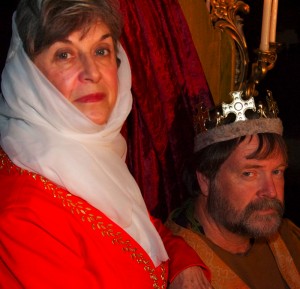 Ah, the holidays. When family drama stemming from jealousy, favoritism, greed, and disputes over inheritance escalate into threats of civil war and patricide. Set in medieval Britain, The Lion in Winter, written by James Goldman and directed by Evan Parry, follows England’s King Henry II as he struggles to select his predecessor from his three unsuitable sons, each more ruthless than the next.

From mommy issues (they were raised by a wet nurse) to daddy issues (he’ll never love them enough to relinquish his crown), the potential heirs are riddled with emotional problems. Richard (Robbie Thomas), the eldest, is brave and militaristic, but behind his aggression lies personal strife that gives the king doubt about his leadership abilities. Geoffrey (Andrew Hibbs), the middle son, is brilliant but too icy and robotic to lead a kingdom, and John (Christian Self), the youngest, is a hot-headed child who never grew up, but what he lacks in sensibility he makes up for in favor from the king.

Complicating the king’s decision are the two women in his life: his conniving wife Eleanor of Aquitaine (Samille Basler) and his young mistress Alais (Laura Artesi), a French princess whose hand was long-ago promised to the future king of England. Henry has allowed Eleanor to return from her faraway castle, where he has discreetly imprisoned her, to join the family at his castle in Chignon, France, completing the image of a happy monarchy.

The castle is decorated for Christmas, and between the restrictive walls of the palace and the forced intimacy of the holidays, the family’s dysfunction is unavoidable. Set designer Richard Heffner brings the heavy, imposing walls of the palace to life in rotating columns that depict different chambers. Between scenes, the actors rearrange furniture on the stage.

Eleanor, a sharp-witted, self-possessed grand dame, is using her annual holiday visit to advance her plot for freedom and power. Alone in her chamber, she sits in front of her vanity, shrouding herself in the entire contents of her royal jewelry box. She dares to glimpse in the mirror only briefly, well-aware that youthful good looks are no longer the sharpest tool in her box of tricks; these days, it’s her ability to spot each man’s weakness and exploit it in her favor. From loving embraces to heartbroken tears to vicious shouts, she effortlessly falls into whichever mood is most advantageous at the time.

Above all, Eleanor is determined to destroy her husband. When she eventually tells Henry, “I’m like the earth, old man. There isn’t any way around me,” the audience believes her.

Henry is a shrewd king, long aware of Eleanor’s tricks, and he plays his hand strategically, anticipating her next move. Brent S. Laing’s performance gives the king dimension and weight; he’s a booming sovereign while negotiating with King Philip of France and a regretful old man when evaluating his trio of unfit sons. The audience empathizes as Henry experiences misgivings about how he raised his sons, while recognizing that they take after him more than he’d like to think.

The sons grow increasingly willing to go to any length to achieve the crown, including selling each other out to the looming Philip, played by Ryan Masson, whose lines are delivered like molasses: slow, seductive,
and menacing.

The play is a chess game, with the stakes slowly rising as Christmas Eve turns to Christmas Day. While the clever diatribes and compelling demonstration of wits are impressive, they lose their edge somewhere around the second-hour mark where double-crosses turn to triple-crosses with no resolution in sight. The Lion in Winter reaches a stalemate with dogged resolve, the king and queen finding themselves prone in a jungle of their own making.