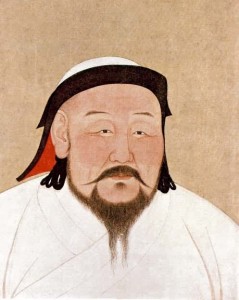 When Marco Polo visited the court of Khubilai Khan in the 13th century, he was astounded by what he saw.

It was a palace glittering with riches, presided over by the medieval emperor Khubilai, who ruled over an enormous kingdom that took in China and Mongolia.

Later, English poet Samuel Taylor Coleridge would dream about the splendors of the imperial city of Xanadu in his poem, “Kubla Khan.”

Now, a major exhibition at the Metropolitan Museum in New York, entitled “The Legend of Khubilai Khan: Chinese Art in the Yuan Dynasty,” is bringing that world to life with exhibits including lavish costumes, stunning paintings and priceless jewels.

The Yuan period, which began in 1215 with the birth of Khubilai, grandson of feared Mongolian warlord Genghis, is one of the most famous in history.

Few people know what Khubilai’s world was really like, however. This exhibition gives an in-depth look not just at the riches of the court but also at how people lived in the period, what they wore, how they served their food and worshipped.

It also aims to change long-held perceptions about the feared Mongols of the time.

James C. Y. Watt is curator of the exhibition. He told CNN: “The art of this period is one of the most dazzling of all time.”

“We want to show that, so that people don’t think of the [medieval] Mongols as a marauding people who just went around killing people — though of course,” he added, “They did do that.”

On display are recent archeological finds, many unearthed in the last twenty years in what is now modern China, alongside paintings, sculpture, costumes, delicate porcelain and carvings.

Key exhibits include examples of the famed “Cloth of Gold,” a sumptuous silk cloth threaded with fine gold made by Mongolian craftsmen and which Marco Polo raved about to Rustichello de la Pisa in “The Travels of Marco Polo.”

A corner-stone carved with dragons, the only major architectural remnant from the great city of Xanadu and never before seen by members of the public, is also on display.

“This is the kind of thing that brings history to life,” Watt said of the piece.

The exhibition is divided into four sections: daily life; religion; paintings and calligraphy; and decorative arts, including porcelain and lacquer work.

Beautiful paintings of dragons, tigers and flowers show the importance placed by artists on drawing nature. The painting style developed in the period, Watt said, was so sophisticated that it has persisted even to this day.

Also on view are a gold saddle-plate for a horse-rider, a jade belt-buckle and a hat with a chin-strap made of beads.

Watt explained that the empire’s vastness made it so rich in cultural offerings: incorporating Mongolia and China, itself an enormous landmass, Khubilai’s influence also stretched to central Asia.

It was also rich in numerous religions that, contrary to popular beliefs about the cruelty of the Mongolians, were actually given sanctuary in the empire.

Not just a showcase for the Yuan dynasty’s spectacular art, the exhibition is also an unexpected case study in early multiculturalism.

“They were so tolerant,” Watt said, pointing out that religions as diverse as Zen Buddhism and Nestorian Christianity (Khubilai’s mother was a Nestorian) were allowed to flourish in the period.

Religious artifacts on display range from sculptures of the Buddha to the fragments of Hindu temples to Manichean Christian paintings.

“It is quite a fascinating study,” Watt said, “of how cultures interact and how it is possible to derive inspiration from each other.”

The exhibition runs until January 2011.