Music, dancing and demos on tap at Chesapeake Celtic Festival 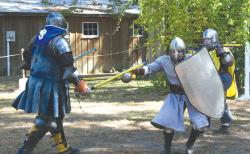 An assortment of activities, including music, dancing, bagpipes, sheep herding, Celtic presentations and storytelling, will be featured during the 21st annual Chesapeake Celtic Festival at Furnace Town Living Heritage Museum in Snow Hill this weekend.

“It’s an intimate festival on 12 acres with non-stop entertainment from 11 a.m. to 5 p.m. in many venues,” said Kathy Fisher, coorganizer of the event. “It’s family-friendly and there [are] a great variety of sounds and sights and vistas and scents, guaranteed to give your senses a workout. Visitors also have opportunities to talk with clans and genealogists and vendors and musicians. You are not watching from a distance; you’re right there.”

There are several new attractions added to the activity line-up for 2010.

Doug Westfall has choreographed new dances for the Footsteps Irish Dancers, who will perform twice each of the festival days, and Dileab Phriseil (Precious Legacy) has been added to the musical entertainment lineup. The group, accompanied by instruments such as the fiddle, whistle and bodhran, plays traditional songs of Scotland and Ireland, in English and Gaelic.

The Medieval European Martial Arts Guild will conduct sparring and cutting demonstrations, and offer free fencing lessons to festival attendees, Fisher said. Swords of Chivalry, another addition to the festival, are “fun, friendly, familyoriented” medieval reenactors, Fisher said. They embrace the style, beliefs and enthusiasm of the Medieval Combat Society, she said.

The Wild Geese Living History Project is a display/demonstration about the Galloglaigh, known to the English as “Gallowglasses.” The men portray Galloglaigh warriors and Gaelic Beannadah, displaying and demonstrating the weapons and armor. The women will demonstrate spinning and tablet weaving and prepare period and culturally correct foods while explaining Medieval Irish foodways.

“I can’t wait to meet and learn from this new group,” Fisher said.

Other activities will include humanities presentations based on Celtic social history; Culleymont Border Collies demonstrating sheep herding, Pat and Chat with the Salisbury Kennel Club and its Celtic-bred dogs and Mid-Atlantic Scottish athletes competing in Highland Heptathlon events.

The Society for Creative Anachronism will demonstrate aspects of life including spinning, weaving, harping, cooking and fighting in armor. There will be representatives of all seven Celtic nations — Scotland, Ireland, Wales, Cornwall, Isle of Man, Brittany and Galicia and Asturias — at the festival.

Several musical groups will perform on the main stage and in the pub tent daily. There will be entertainment on the Ceilidh stage as well. This stage is also open to anyone who wants to perform.

Visitors also can see Furnace Town’s artisans — blacksmith, gardener, broom maker, printer, woodworker and weaver — at work. The Celtic Marketplace and Pavilion is where artisans will display their wares.

Food vendors will offer Eastern Shore specialties and Celtic cuisine. Whiskey and wine tastings will also be available. The Ceilidh, which will feature song, dance and storytelling, will take place on Saturday night from 6:30-8 p.m.

The festival will run from 11 a.m. to 5:30 p.m. both days. Adult admission costs $15 per day, $5 for children ages 2- 18. Saturday night’s Ceilidh costs $5. For more information and updates, visit Celtic Fest or e-mail celticfest@ comcast.net or kfisher44@verizon.net.