Medieval Masterworks from Court of Burgundy Leave France for First and Only U.S. Tour in 2010 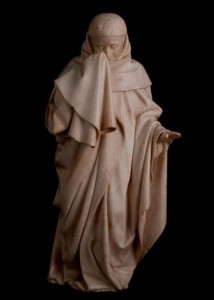 A group of 40 of the greatest masterpieces of medieval sculpture, which have never before been presented together outside of France, will be on view at the Dallas Museum of Art from October 3, 2010 through January 2, 2011, as part of a first and only seven-city exhibition tour in the United States.

Carved by Jean de la Huerta and Antoine le Moiturier between 1443 and 1456/57, the unique devotional figures, known as “mourners,” were commissioned for the elaborate tomb of the second duke of Burgundy. Crafted with astonishing detail, the alabaster sculptures exemplify some of the most important artistic innovations of the late Middle Ages. The Mourners: Medieval Tomb Sculptures from the Court of Burgundy provides an unprecedented opportunity to appreciate each sculpture as an individual work of art.

Co-organized by the Dallas Museum of Art and the Musée des Beaux-Arts in Dijon, France, under the auspices of the French Regional & American Museum Exchange (FRAME), The Mourners premiered on March 2, 2010, at The Metropolitan Museum of Art in New York to critical acclaim. “Anyone who cares about the art of sculpture should pay them a visit, for each is a small masterpiece of stone carving and humanist realism,” praised the New York Times in its front-page review. “The Mourners casts a magic spell that is as sublime and compelling as anything you are likely to encounter in any museum this season…. It’s a small triumph of an exhibition,” maintained the Wall Street Journal.

Debuting with the Dallas presentation will be a short interpretive film that will be shown inside the exhibition galleries to contextualize for visitors the cultural and historical importance of the tomb sculptures. Produced specifically for the opening of the DMA presentation, the film includes interviews with exhibition curator Heather MacDonald and other scholars along with newly filmed footage of key medieval monuments in Dijon.

“This singular exhibition exemplifies the DMA’s ongoing programming, which connects Dallas residents and visitors with extraordinary art and cultural treasures from around the globe,” said Bonnie Pitman, The Eugene McDermott Director of the Dallas Museum of Art. “These are incredibly beautiful works that are as powerful and meaningful today as they were the day they were created.”

“The loan and tour of the ‘mourners’ is a shining moment in the history of FRAME, a testament to shared friendship and shared knowledge,” added Richard R. Brettell, founding Director of FRAME in the United States.

The sculptures—each approximately 16 inches high—depict sorrowful figures expressing their grief or devotion to John the Fearless (1371–1419), the second duke of Burgundy, who was both a powerful political figure and patron of the arts. The tomb, which is not traveling, comprises life-sized effigies of the duke and his wife, Margaret of Bavaria, resting upon a slab of black marble, with a procession of mourners weaving through an ornate Gothic arcade beneath. Each individual figure has a different expression—some wring their hands or dry their tears, hide their faces in the folds of their robes, or appear lost in reverent contemplation. The motif echoes that of ancient sarcophagi, but these innovative tombs were the first to represent mourners as thoroughly dimensional, rather than in semi-relief. The presentation of the mourners passing through the arcades of a cloister was also a great innovation for the tombs of the era.

“The renovation of our museum has created the opportunity for these exceptional works to travel together to the United States,” said Sophie Jugie, the Director of the Musée des Beaux-Arts de Dijon. “This FRAME project allows the sculptures to be viewed and appreciated as discrete works of art.”

During the 14th and 15th centuries, the Valois dukes of Burgundy were among the most powerful rulers in the Western world, presiding over vast territories in present-day France, Luxembourg, Belgium and the Netherlands from their capital in Dijon. The significant artistic patronage of the dukes drew artists, musicians and writers to Dijon, which became a major center of creativity and artistic patronage.

This prolific creativity and innovation extended to the ducal court’s sculpture workshop, which produced some of the most significant art of the period. The tombs of the first two Burgundian dukes, John the Fearless and his father, Philip the Bold, are among the best examples. Both tombs were originally commissioned for the family’s monastic complex outside of Dijon, the Charterhouse of Champmol, and were moved following the French Revolution to the Musée des Beaux-Arts in Dijon, where they have remained since the early 19th century. The forthcoming exhibition tour will enable the mourners to remain on view during the museum’s renovation.

The Mourners: Tomb Sculptures from the Court of Burgundy was organized by the Musée des Beaux-Arts de Dijon and the Dallas Museum of Art, under the auspices of FRAME (the French Regional and American Museum Exchange). Richard R. Brettell, Ph.D., was the founding director of FRAME (USA) and served in that position until May 2010; his successor will be announced in November. Pierre Provoyeur, Conservateur Général du Patrimoine at the Direction des Musées de France, serves as Director of FRAME in France. The exhibition has been curated by Sophie Jugie, Director of the Musée des Beaux-Arts, and Heather MacDonald, The Lillian and James H. Clark Associate Curator of European Art at the Dallas Museum of Art. It is supported by a leadership gift from the Iris and B. Gerald Cantor Foundation. Additional support is provided by the Florence Gould Foundation, the Eugene McDermott Foundation, Connie Goodyear Baron, and Boucheron. Major corporate support is provided by Bank of the West – Member BNP Paribas Group. This exhibition is supported by an indemnity from the Federal Council on the Arts and the Humanities. Air transportation in Dallas provided by American Airlines. Promotional support provided by CBS Radio, The Dallas Morning News, KSCS-FM 96.3, and WBAP-FM.

After presentations at The Metropolitan Museum of Art in New York and the Saint Louis Art Museum, the U.S. exhibition tour includes:

Before reinstallation in Dijon, The Mourners will be displayed at Musée National du Moyen Âge in Paris (Summer 2012)

The Mourners is accompanied by a richly illustrated 129-page catalogue by Sophie Jugie, Director of the Musée des Beaux-Arts, with prefaces by FRAME Co-Presidents Marie-Christine Labourdette and Elizabeth Rohatyn and Dijon Mayor François Rebsamen, and an introduction by Philippe de Montebello, Director Emeritus of The Metropolitan Museum of Art and FRAME Trustee.

Published by Yale University Press, the catalogue explores the social and political context in which the tombs were created and features detailed photographs and descriptions of each sculpture in the group. An in-depth discussion of the architecture and aesthetics of the period reveals the innovative craftsmanship behind the ducal tombs and the mourners themselves. An examination of the tomb’s restoration reveals the museum’s efforts to care for the objects and address the unique—and widely varying—needs of each piece.

In addition, a special website dedicated to the mourners (The Mourners) provides extensive historical context as well as 360-degree views of each sculpture in two and three dimensions, allowing visitors to intimately examine every angle and detail. The website, offered by FRAME, also features an interactive exploration re-creating the tomb’s cloister arcade and showing the mourners in situ. Special photography of The Mourners was made possible by a grant from the Samuel H. Kress Foundation.

The French Regional & American Museum Exchange (FRAME), a formal collaboration of 12 museums in France and 12 museums in the United States, serves as a catalyst for cultural exchange between France and the United States. Founded in 1998, FRAME is dedicated to promoting French-American cooperation in the cultural arena concerning museums, their collections and their professional staffs. It fosters partnerships, projects and exchanges of information, personnel, technology and resources. The projects range from a shared website to many joint exhibitions, educational resources and programs, and publications. They serve the cultural needs of each country and educate a constituency of great size, breadth and distribution. The museums of FRAME are all purposely drawn from regions outside the economic and governmental capitals of both countries in order to draw attention to, and broadly share, the richness of cultural resources that characterize these institutions and regions. Richard R. Brettell, Ph.D., was the founding Director of FRAME (USA) and served in that position until May 2010; his successor will be announced in November. Pierre Provoyeur, Conservateur Général du Patrimoine at the Direction des Musées de France, serves as Director of FRAME in France.

Founded just before the French Revolution, the Musée des Beaux-Arts de Dijon is a superb combination of the prestigious architecture of a ducal residence, now the Palais des Etats de Bourgogne (Burgundy State Palace), and one of the richest collections in France. Thanks to the legacy of the dukes of Burgundy, some undisputed masterpieces from the end of the Middle Ages are displayed within its walls. Its exhaustive collections, resulting from both the founding period of the French Revolution and the curiosity of collectors, lead to the most varied of discoveries, from Egyptian art to the 20th century. Welcoming all art forms, the museum regularly organizes exhibitions, tours, conferences, workshops and shows for a dynamic and often unusual exploration of its collections.

About the Dallas Museum of Art

Located in the vibrant Arts District of downtown Dallas, Texas, the Dallas Museum of Art (DMA) ranks among the leading art institutions in the country and is distinguished by its innovative exhibitions and groundbreaking educational programs. At the heart of the Museum and its programs are its encyclopedic collections, which encompass more than 24,000 works and span 5,000 years of history, representing a full range of world cultures. Established in 1903, the Museum today welcomes more than 600,000 visitors annually and acts as a catalyst for community creativity, engaging people of all ages and backgrounds with a diverse spectrum of programming, from exhibitions and lectures to concerts, literary readings and dramatic and dance presentations.

The Dallas Museum of Art is supported in part by the generosity of Museum members and donors and by the citizens of Dallas through the City of Dallas/Office of Cultural Affairs and the Texas Commission on the Arts.