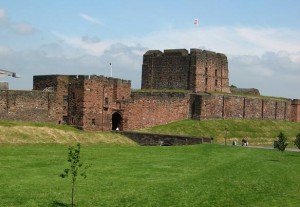 A two-day fair showcasing Roman, Viking and Victorian life will take place in Carlisle this weekend.

The international historical market starts on Friday and is expected to attract around 500 visitors to the city.

More than 50 stalls and traders in period dress from across the UK and Europe are heading to the fair, which will be held in the Swallow Hilltop hotel on London Road.

It’s the second time the market – the largest of its kind in northern England – has been staged in Carlisle.

Marie Whitehead, director of Carlisle Tourism Partnership, said it was a real achievement to bring it back to the city.

“The first event in Carlisle in May was very well-attended with more than 500 people coming along,” she said.

“We see it as a way of showing Carlisle’s history with visitors and spreading the word about the heritage the city has to offer.”

Historia Originata events are a magnet for museum curators, history professionals and re-enactment groups from across the country.

Event organiser George Topp said: “Carlisle has always played an important part in British history, right from the days of the Romans, and it is only right that we should acknowledge that today.

“Nowadays history and heritage are becoming more and more popular as people delve into the past, and Historia Originata is an ideal way of giving local people a glimpse into history often forgotten.”

He described Carlisle as a ‘lovely Border city’ which retained its individuality when others were becoming clone towns.

“This event, which we hope to make a biannual one, serves the dual purpose of meeting the needs of the thousands of re-enactors and history professionals in the north of England, Scotland and Northern Ireland, and also gives the curious an intriguing glimpse into the past.

“Many of the items on display – for example heritage glass, ornate wooden boxes and historic jewellery – have as much a place in the 21st century home as they did in a medieval tent or castle.”

Mr Topp said he hoped the event could eventually lead to a major history festival being established in the area.