Bicycle Jousting, transferring a medieval sport into a modern sport 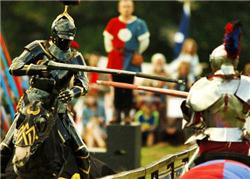 Jousting was a sport that originated in Medieval England and it was brutal. Two Knights in full armour on horseback would charge towards one another and would each try to impale the other with a long pointed lance.

It was a very dangerous and thrilling sport but slowly over the years it faded away because of its violent nature. It started to resurface again in modern times with plastic or foam tubes being used instead of sharp wooden lances.

Now a new modern version of jousting has emerged, bicycle jousting. This interesting sport looks all set to bring jousting into the modern era with a bang.

The first joust that took place takes us way back to 1066 in Medieval England. Even though the martial sport did not take off until the 12th century, it did take place before that in scattered locations around the country. The joust was added to tournaments of skills that would test the abilities of a knight and it was meant to keep a knight active and trained during times of peace in the region.

Slowly the jousting part of tournaments became the most popular and knights would be called upon to showcase individual feats of skill and talent. Even though jousting was very dangerous, a lot of money could be made by a participant and lots of knights made fortunes at tournaments.

A joust is basically when two knights sit on horses and hold a long lance in one hand and a shield in the other. They then ride their horses towards each other and have to try to unseat their opponent while defending themselves from his blow.

It took a lot of skill and bravery to get up onto a horse and compete in a jousting event. Despite the fact that it was very dangerous and brutal, the sport persisted in Europe until the 17th century when it slowly started to lose popularity.

It made a revival in recent times and mock tournaments still take place today where people dress up as knights and compete in jousting events. Today they do not use long sharp wooden lances but foam or plastic pipes instead.

Here we see the emergence of bike hackers. These were bikers, who would disassemble their bicycles and alter them in shape, length and design just for the fun of it. This is where the sport of bike jousting originated from.

Bike hackers invented a special type of bicycle called the tall bike. This bike was six feet in height and looked similar to old school penny farthing bikes. It basically had another frame welded onto the original frame and the seat and pedals would be used of the higher frame. So a person would ride the bike 6 feet in the air.

Through riding around on these for a while the bike hackers decided to try jousting while riding the tall bikes. This proved to be a very popular experiment and people started to get interested. Two competitors would mount their very high bikes and in one hand they would have a PVC (Poly vinyl chloride) pipe and in the other a shield. They would ride their bikes towards each other and try to dislodge each other off their bikes.

Even though they did not use lances, PVC pipes hurt as well and numerous people got injured every year taking part in this crazy sport. Over time the sport spread to the regular bicycle riding crowd and people started to use their ordinary bikes to joust with.

The hard part about jousting on a bicycle is to keep your balance. A horse will go, more or less, in a straight line but a bike can teeter and swerve left and right and it is hard to keep control of it while holding a pipe and a shield. As the sport grows and becomes more popular, we may see a proper bike jousting tournament take place similar to the jousting tournaments that took place in Medieval England.

It looks as if bicycle jousting is here to stay, it is becoming more and more popular everyday and lots of people are queuing up to take part in a round of jousting on bicycles. It seems the idea of trying to knock someone off of a bicycle with a pipe is very appealing.