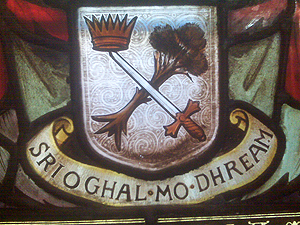 Topics as unique and diverse as medieval Irish magic and the drinking of blood in the ritual context of mourning will be explored at the Seventh Australian Conference of Celtic Studies at the University of Sydney this week.

Sydney is the only university in the southern hemisphere that offers Celtic studies, which examines Celtic languages, history and literature.

The influence of Celtic Studies extends throughout the world, where many Celtic languages, such as Irish and Scottish Gaelic, are still in everyday use.

Australia is no exception, and Celtic influences are seen throughout our history. For instance, Governor Lachlan Macquarie, who celebrates his bicentenary this year, was born in Scotland’s Inner Hebrides and likely spoke Scottish Gaelic as his first language.

“It’s very exciting to get people together with scholarly interests in Celtic studies to present the fruits of their most recent research,” says Professor Anders Ahlqvist, Chair of the Department of Celtic Studies and organiser of the conference.

“A very large proportion of the Australian population has Celtic roots. It’s very much a part of the cultural heritage of more Australians than probably know about it.”

The conference program features addresses such as European scholarship and the study of medieval Irish magic, The drinking of blood in the ritual context of mourning, and Burying the King’s cat in corn: domestic animals and the law in medieval Wales.

According to Professor Ahlqvist, Celtic studies is much broader geographically than people often realise, and historically extended as far east as Asia Minor.

“Much of Europe north of the Alps and west of the Apennines was Celtic speaking for a long time. Celtic languages have left a lot of traces in place names and in linguistic technical ways. It’s really a part of the cultural heritage of Europe.”

The Australian Conference of Celtic Studies runs under the auspices of the University’s Celtic Studies Foundation and will be held at the Camperdown Campus. For booking information, contact Professor Anders Ahlqvist.