Tailoring the Medieval Festival, one costume at a time 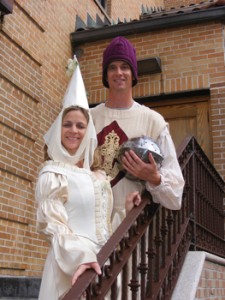 A taffeta dress with a metallic sheen to it swishes by. Flowers line the women’s hair. Men saunter around in faux armor. Silk, sheer scarves, and ribbon laced-up bodices are a blur across the green lawns.

Many will be dressed to the nines in medieval garb.

And one man has been quietly shaping and molding Medieval Festival fashion for years.

Since 1994, Robert Coleman has designed and made the costumes for the politicians, celebrities, and special guests that appear in the parade.

Coleman describes the festival as a “medieval free-for-all” and a “medieval costume parade.”

In a typical year, Coleman designs and sews 50 to 75 costumes, though he said it is difficult to estimate because he designs pieces that are then put together to make full costumes.

Before Coleman began making costumes, the event organizer – the Washington Heights and Inwood Development Corporation – would rent medieval costumes. Sometimes the rented costumes would get lost, stolen or damaged. Coleman said he saw the benefit of creating a collection. Somewhere in the range of 200 to 300 costumes are now in use.

Coleman works throughout the year, going to museums and libraries and watching movies to research types of clothing worn during the Middle Ages and cataloging his ideas.

He draws sketches to use for patterns. By April, he is cutting and sewing fabric.

“I try to get as much work done as possible before the summer heat,” said Coleman, who works out of a bedroom-turned-workshop in his Washington Heights apartment.

Coleman said his workshop is a menagerie of sewing machines, cameras, knitting and crocheting materials.

Despite catering to some high profile attendees, Coleman said he has no contact with the people who will wear his costumes before the event. So he designs his costumes in general sizes so that they’ll fit a wide range of people.

Much of the fabric is donated by Materials for the Arts, part of the New York City Department of Cultural Affairs. The fabric selection is limited by what is donated, but Coleman said he usually chooses fabrics that can be laundered, like cottons, linen and silks. Upholstery fabric lends itself to garments that require intricate patterns. In addition, he limits himself to colors that would have been seen in the Middle Ages – colors that could be made with vegetable dyes and stains. This means no neons, reds or extremely dark colors.

As for his style, Coleman said he is a relaxed person, and his costumes reflect that. His garments are meant to be comfortable, durable and functional. His outfits are more indicative of what the medieval middle class might have worn: nothing too formal. While the style is based on medieval dress, Coleman said some of his ideas come out of today’s fashions. He occasionally takes a current trend, in footwear or accessories for instance, and imagines how it would have played 1000 years ago. This year Coleman focused more on men’s wear, whereas in the past he’s created more clothing for women.

Besides slight design variations with the changing trends, Coleman traced some costume design changes to personal, as well as collective, life events.

In 2000, Coleman battled lung cancer and a brain infection, while also being HIV positive. This limited his mobility. After 9/11, his creativity changed from whimsical to serious and necessity-based.

In addition to designing costumes for the Medieval Festival, Coleman said he spends a lot of his time watching over his block, and the youth there, near the George Washington Bridge.

A self-described “Washington-Heights-onian,” Coleman’s family has lived here for three generations. He went to elementary and middle school in the neighborhood before going downtown to attend the High School of Fashion Industries.

So does the designer wear his own designs?

“By the time the festival takes place, I’m usually too exhausted to get dressed up,” said Coleman. “Maybe I’ll put something on.”

“I’m more comfortable being behind the scenes than in the forefront,” he added.

The 26th annual Medieval Festival is scheduled for Sun., Oct. 3, from 11:30am to 6pm in Fort Tryon Park. (The rain date is Sun., Oct. 10.) The event is free to attend and includes performances, music, dance, a jousting match, and vendors selling crafts, food and drink. For more information, visit Medieval Festival.