At 1841 Society Luncheon, a Medieval Pilgrimage Comes to Life 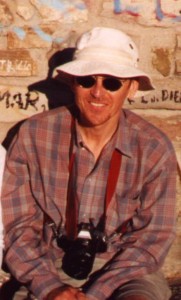 At a recent luncheon, a Fordham professor gave a virtual tour of a European pilgrimage route that has attracted untold thousands of people throughout history, ranging from medieval noblemen to Fordham students who posted travel dispatches on the Internet.

Richard Gyug, Ph.D., professor of history and medieval studies, spoke on Sept. 21 at a luncheon of the 1841 Society, whose members have established a life income gift to Fordham or included the University in their estate plans. Using slides, he walked the audience through the long history of the Camino de Santiago, a 500-mile pilgrimage route that starts in France and ends in northern Spain, at the cathedral of Santiago de Compostela, the legendary burial site of the apostle St. James.

Gyug, interim director of Fordham’s Center for Medieval Studies, has walked the route with Fordham students as part of study tours in 2007, in 2008, and again this past summer. Students walked the route’s final 200 miles.

In his presentation, Gyug drew parallels between those who traveled the route today and in centuries past. Some people he met along the way were marking pivotal moments in their lives—two had just retired, for instance, and one had just lost his wife of 35 years. For them, he said, the pilgrimage was a rite of passage that marked a life transition, just as it was for pilgrims of an earlier time who were walking to atone for their sins.

“Modern pilgrims take this sense of liminality, of passage, [and] make of it a rite of passage, which it was originally,” he said. “We lack rites of passage. We’re an age that often downplays ritual.”

In addition, he said, “there’s another sense of transition for both modern and medieval pilgrims in that you leave your daily community. You cross a threshold into the world of the pilgrimage, which is a different world, with its own rules.”

He described people of various nationalities, and vastly different backgrounds, coming together in youth hostels and bars and restaurants, and on the road, where they all undergo the same physical challenges or take part in the same rituals of the route. In one place, travelers weaved sticks into a fence that was recently built along the road. In another, they added stones to roadside cairns, which were used in pre-Christian Europe to protect crossroads from demonic possession.

Santiago de Compostela became a major pilgrimage destination in the tenth and eleventh centuries following the revival of the cult of St. James, Gyug said. The first named pilgrim was a French noble—Godescalc, bishop of Le Puy—who made the trek in 951.

Future pilgrims would leave their mark on the trail. For instance, when Adalard, viscount of Flanders, got caught in a snowstorm in the French town of Aubrac in 1120, he swore that if he were saved he would dedicate his life to the pilgrims. He survived, and established a hostel, as well as a commandery, or center for knights who were defending the pilgrimage route. Dozens of bridges were installed along the trail, Gyug said.

“All along the way … you pass sites that were built, and have their memory and their origins, in the pilgrimage,” he said. “I think pilgrims wandered all over the countryside until they reached a fiord or a river, and there a town grew, and a cult site of its own.”

He showed sites that likely had transcendent meaning for medieval pilgrims—the great church at León, the approach to O Cebreiro, or Santiago de Compostela itself, the end point of the journey.

At other sites, however, “the medieval ideal is, to us, incomprehensible or ludicrous,” he said, showing a cathedral at Santo Domingo de la Calzada. The cathedral bears the image of a chicken coop, marking the medieval tale of two birds on a judge’s dinner plate that sprang to life to show him that a young man who had been hung nearby was actually still alive.

“That’s one side of medieval devotion that is not transcendent, necessarily, and much more difficult for us to make sense of,” he said, to laughter.

Founded in 1841, Fordham is the Jesuit University of New York, offering exceptional education distinguished by the Jesuit tradition to approximately 14,700 students in its four undergraduate colleges and its six graduate and professional schools. It has residential campuses in the Bronx and Manhattan, a campus in Westchester, the Louis Calder Center Biological Field Station in Armonk, N.Y., and the London Centre at Heythrop College in the United Kingdom.

Medieval Catholicism was not as gloomy as the BBC portrays it