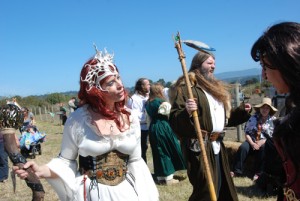 With a couple of wooden boxes, a rope and a small crowd of spectators, you might’ve thought you were watching a scene from Monty Python and the Holy Grail.

The game, Hunker-Hauser, a sort of tug-of-war on small boxes, was just one of many reenactments at the annual Excalibur Medieval Tournament and Market Faire over the weekend. What began as a fundraiser at St. Bernard’s Catholic school created a time warp in the parking lot adjacent to Mad River Community Hospital.

Mary Doran teaches third and fourth grade at St. Bernard’s Catholic School, and started the event in 2003 as a way for her students to learn about medieval history.

”I thought, ‘What could I do that would teach these kids in a fun way?’” said Doran, who wanted to show her students how far society has come in the last 500 years. “It’s worked wonderfully.”

The festival attempted to replicate the era known as the Dark Ages, from A.D. 476 to 1500, and featured an archery tournament as well as jousting. The Seattle Knights, a group that travels around the country to entertain crowds while dueling on Friesian horses, served as the highlight on Sunday.

The group, dressed in full armor, performed a two-part “Arthurian rewrite,” mixing in historical tidbits between taking aim at each other armed with poles and shields. But the dueling didn’t stop with the show.

Kids got a chance to practice their own skills with “boffer swords” — foam sticks covered with duct tape. Amanda Andrew and Hunter Marler-Leon got to take turns battling each other.

”It’s a lot of fun,” said Marler-Leon, a sixth-grader from Jacoby Creek Elementary who attended his fourth straight Excalibur festival on Sunday.

Over 40 vendors dotted the field, forming a sort of medieval town. Proceeds from the event went to local schools, Mad River Community Hospital and the Heart of the Redwoods Horse Rescue, Doran said.

People visited from all over the west coast, including David and Kathy Ritscher, who drove up to Arcata from Fresno. The couple makes their way around the state to different festivals as a way to show off a variety of artwork.

”I’ve always liked the idea of renaissance,” said Kathy Ritscher. “Once I got into it, I was hooked.”

The sentiment was shared by Pia Gabriel, who wore a wool dress as she showed off a collection of tools and games like Hunker-Hauser from the era. Gabriel said the Dark Ages is her favorite time period in history.

”It’s down to the basics, it’s really nice,” said Gabriel, who has been doing reenactments since she was a kid. “You really just end up living it.”