History, shopping and the sound of bagpipes mingle along Edinburgh’s main street 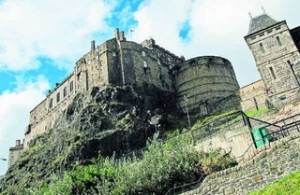 “I will make a palace fit for you and me.

Of green days in forests and blue days at sea.”

The castle is a man’s place, spare and stern, ringed by cannon and places for men to fight.

Only one part is feminine — and it’s survived for 880 years. Tiny St. Margaret’s Chapel, with its simple white nave and curvy chancel, has seen many a Scottish bride marry her warrior — and still holds weddings today.

It sounds strange to say, but Edinburgh Castle is comforting. It reminds us that although rulers and generations come and go, some things abide. The human need to see a vista. The need for security, beauty and ritual. The need for continuity, especially when the world goes awry.

And here, too, lies the Stone of Destiny, Scotland’s biggest treasure. It sits in a hushed room, under glass, next to the Scottish jeweled crown. It is nothing much to look at, just plain sandstone with iron rings. Yet it was the royal coronation seat for Scottish monarchs of yore — and British crowns since.

For 700 years, it was kept at Westminster Abbey in London, until it finally came home in 1996 to Edinburgh Castle to stay.

This month Edinburgh was named by Condé Nast Traveler magazine as the best tourist city in all of Britain — even surpassing London.

That may be debatable, but there is no disputing the fact that Edinburgh has managed to segue from its tumultuous political history and medieval rat-filled streets to a modern, exuberant city.

Scotland’s biggest overseas tourist market is Americans, probably because so many of us have Scottish roots. About 4.5 million Americans claim Scottish heritage, nearly equal to the current population of Scotland itself.

About 352,000 Americans visited Scotland last year, a number expected to fall this year due to tough economic times.

From the castle, you can see far out past Edinburgh’s orderly new town (built in the 1700s) to the Firth of Forth, which leads to the North Sea.

Unsteady or elderly people take tour buses or taxis up to the castle. I walked, and it wasn’t bad at all. From the flat Grassmarket area (look up, and there’s the castle towering above), just walk up a flight of steps called Granny Green’s, then another 187 steps on Castle Wynd street. You’re there.

Most tourists have only a day or two in Edinburgh, so it is important to get to the good stuff quickly. That’s easy — most of it is along the straight Royal Mile that descends from the castle. Sections of it are called Castlehill, Lawnmarket, High Street and Canongate, but it’s all the same street. It’s lined with shops, tiny lanes (wynds), little museums, historical buildings and churches. There is more than you can do in a day, just on this one street, but here is what I did:

• Tartan Weaving Mill and Exhibition: Just outside Edinburgh Castle. The layout is gawky, but this museum/store/tourist trap shows how tartan is made on looms. And it’s a good place to buy quality tartans, silver, cashmere, kilts.

• Scotch Whisky Heritage Center: It has a 90 minute tour, but most visitors concentrate on its shop, which stocks enough whisky to euthanize the city (and is sold in sturdy boxes able to travel safely in checked luggage).

• Souvenir shopping: Until overwhelmed by too much tweed, tartan and questionable cashmere.

• St. Giles Cathedral: Stately mother kirk of the Church of Scotland (Presbyterian) dating from the 14th Century. To impress my Presbyterian minister back home, I also made a quick stop at founder John Knox’s house down the street, but absorbed no profound theological lessons. (Speaking of which, Scotland’s churches may be pretty, but few Scots attend. A 2008 government survey found 40% don’t believe in God.)

• Bagpipe listening: As I slipped in the door of Bagpipes Galore, a customer was testing out new pipes and the clerk was adjusting the instrument. Trust me — you have never heard the bagpipe until you’ve heard it blast your eardrums in an 8-by-8-foot room.

• Palace of Holyroodhouse: Famed as the site of the murder of Mary Queen of Scots’ secretary in 1565, it’s also Queen Elizabeth II’s elegant home when she’s in Edinburgh.

• Parliament bashing: At the bottom of the street, I saw the Scottish Parliament. Right away, I agreed with the critics that it is indeed a 2004 clod of a building that looks like a blocky apartment with scrap wood tacked onto its edges.

Still, it’s pretty inside. And it is a symbol of a resurgent Scotland, which endures, and which will endure long after this masculine building collapses like matchsticks but St. Margaret’s Chapel remains.