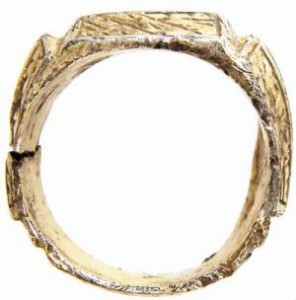 A Warminster soldier who unearthed what he thought was a ring from a Christmas cracker is ‘gobsmacked’ to learn it is in fact a medieval ring which is now being evaluated by the British Museum.

The ring was the first find of novice metal detectorist David Iles, who has been in the Army for 27 years and is currently serving with the Royal Engineers based in Warminster.

Mr Iles, who lives with his wife, Carolyn, in Sutton Veny, near Warminster, found the item near Amesbury in January, shortly after taking up the hobby.

“I thought it was something from a Christmas cracker because it had that sort of shine and it felt so light when I picked it up.

“I showed it to my mate and he said ‘I think you’ve found something a bit better than a ring from a cracker’.”

The ring was deemed as treasure at Trowbridge Coroner’s Court on September 14 and will now go to the British Museum for valuation.

“I was gobsmacked,” Mr Iles said. “My friend found nothing on that day so I suppose it was just beginner’s luck.

“It was a 14th century clergy gilted ring. It’s probably from a settlement in this area.”

The soldier, who usually detects in the Salisbury and Warminster area, said: “Metal detecting was something that I’ve always been interested in doing and my friend had a spare metal detector which I ended up buying.

“I’ve found a few Roman coins and broaches and other things but nothing that I’ve had to hand in like the ring.

“My collection is starting to build up now.”

Salisbury and South Wiltshire Museum is now interested in buying the piece.

Collections manager at the museum, Jane Ellis-Schon, said: “The museum is interested in purchasing the ring but we won’t make that decision until it’s been to the evaluation committee at the British Museum.

“We await the response from that committee before making our decision.”

Source: This is Wiltshire