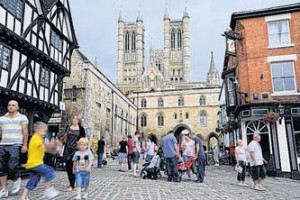 Visitors to Lincoln can now discover the city’s medieval heritage – from the comfort of their own home.

Following the successful launch of Roman and lost church maps, council experts now hope to shed light on the city’s Dark Age – from the cathedral and Castle Square, to the hidden history of individual shops and homes.

John Herridge, heritage officer at the City of Lincoln Council, said the new map, which features information on 80 streets and 52 buildings, was part of continuing efforts to make as much information as possible available to the public so they can discover Lincoln’s heritage for themselves.

He said: “Of course, the well-known buildings such as the Stonebow in High Street and Exchequer Gate, next to the cathedral, are on the map but there are also a few places that might surprise people.

“Well known streets such as Mint Street were around in medieval times and we know Hungate dates back to the 14th century, with the name meaning ‘street of the hounds’.

“Many of our medieval buildings are still in use today – the shops on High Bridge, the Witch and Wardrobe pub and the Harlequin book shop on Steep Hill all date back to the 14th and 15th centuries.

“We hope to add pictures to the descriptions on the map, but for the time being people can explore the map to pinpoint medieval sites and then go out and see them for themselves in the city.”

Since its launch in September last year, the Roman Lincoln Google map has had more than 38,000 visits through both the council’s own www.lincoln.gov.uk site and the search engine – with even more potential tourists viewing it through other websites such as Visit Lincolnshire.

The second map in the series, covering the city’s lost churches and areas of religious interest, has received 4,388 visits since its launch in March.

Councillor David Gratrick, heritage champion at the City of Lincoln Council, said he was extremely pleased the maps and websites – also including Heritage Connect Lincoln.com – had been so popular.

“It is testament to people’s hunger to learn more about our beautiful, historic city,” he said.

“It’s a real success story that we are able to use modern technologies to make the massive amount of information held by the council and other organisations more accessible to the general public.

“This means local people and visitors alike can learn much more about the things they see in the city, and go some way to appreciating the true value of our heritage.”

Source: this is Lincolnshire