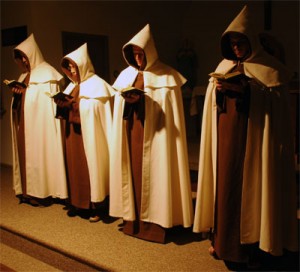 Plans by a group of Roman Catholic hermit monks to erect an outsized monastery in northern Wyoming have pitted neighbor against neighbor and aroused debate with religious undertones.

At the center of the Wyoming controversy is a remote ranch where the Monks of the Most Blessed Virgin Mary of Mt. Carmel want to build a 144,000-square-foot French Gothic-style monastery and coffee roasting barn. The monastery will feature a church that seats 150, with one spire rising 150 feet.

The proposal triggered a clash between ranchers who live miles apart, trying to protect their quiet, rural open spaces, and the hermit monks who live a secluded, Spartan life of prayer and meditation and are looking for more room to meet their expanding order and maintain their privacy.

And it’s forced the monks to temporarily abandon their seclusion as they seek permission to build.

“They’re hermits and they don’t interact very much with the public,” said Michael LaBazzo, an attorney representing the monks. “They have recently, but not by choice.”

The plan has cleared a planning and zoning board but still needs approval from Park County commissioners, who will discuss it on Oct. 5.

The monks now occupy a small monastery near the hamlet of Clark, about 40 miles east of Yellowstone National Park.

They belong to an order rooted in the 16th century that requires they sustain themselves through mostly manual labor. They dress in handmade full length robes, sleep in small individual housing units called hermitages with no radio, no TV, no Internet. They raise and grow most of their own food, funding their operation by making and producing their own brand of coffee called Mystic Monk. They market mugs, bag clips, T-shirts, travel mugs and a CD of their Gregorian chants over the Internet and with mail-order catalogs.

Masses are celebrated in Latin. No women are allowed to join. The Rev. Daniel Mary created the Wyoming monastery in 2003.

And the order is growing. The original two members now number 18. They occupy about 40 acres nestled in the Beartooth Mountains.

To maintain their seclusion, the monks have their eyes on a 2,500-acre ranch about 50 miles away in a rugged area with creeks fed by looming mountains. The area has few roads, a few widely dispersed ranch homes, a few scattered oil and gas wells. The ranch is about 14 miles from the nearest public road, and the nearest town, 20 miles away, is Meeteetse, population about 350, that is most famous for the arrest of outlaw Butch Cassidy in 1894.

They plan to build a monastery mainly of stone with 30 separate hermitages for monks, a small dormitory for men in training to become monks, a commons area and a church spire rising the equivalent of 15 stories high.

Ranch owner Dave Grabbert, whose family has held the property since 1938, has agreed to sell to the religious order, and he describes the two monks he has met as personable, intelligent and “just decent guys.”

“I don’t care if they’re Hindus, Buddhists or what they are, but being decent people, that’s really a plus in this day and age,” Grabbert said. “Not everyone is.”

Some of his neighbors object to the sale, citing concerns about traffic, wildlife, water — and questioning whether the massive stone structure fits with the rural landscape.

“The plans look like someone took an old cathedral and just dropped it onto our beautiful landscape,” Mary Elliott, who lives about 15 miles from the site, wrote to the Planning and Zoning Commission. She noted the religious order wouldn’t be paying property taxes.

“As their contribution to this community will be prayer rather than property taxes the town will take a large loss on the currently paid property taxes,” Elliott wrote. “As for prayer, I am sure we are all grateful for that but are capable of doing that ourselves.”

Alan Siggins, chairman of the Park County Planning and Zoning Commission, which unanimously approved permits for the project, said he’d heard rumors of anti-Catholic comments but none surfaced during the public hearing.

“So no it didn’t get into, if you will, a religious war,” Siggins said.

Deb Wendtland, attorney for several ranchers neighboring the site, said her clients are concerned about traffic that the monastery of that size might attract.

“You see this huge edifice and a paved road leading to it is an invitation,” Wendtland said.

Grabbert rejects the traffic concerns, saying no one complained when oil and gas trucks and timber trucks used the road.

LaBazzo said the monks have been working to resolve the traffic concerns, including limiting the delivery of coffee beans to once a month.

Another issue: The site is on an easement Grabbert granted across his ranch to a neighbor to access an irrigation pond. Either the easement or the monastery would have to be moved.

Wendtland said her clients are willing to move the easement if a traffic solution can be reached, but that going to court is also an option.

“They’re not trying to hold it up,” she said. “They’re just doing their best to essentially build good neighbors.”

“What’s puzzling to me is if people complain about these guys as neighbors, what kind of neighbors would they want,” he said.

Medieval Catholicism was not as gloomy as the BBC portrays it