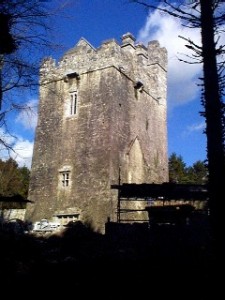 The idea of welcoming dinner guests across a drawbridge may be romantic, but if your home is a European castle, the maintenance costs can be daunting.

When Malcolm Goodbody heard that the 15th-century, 230-square-meter Dunsandle Castle in County Galway, Ireland, and its surrounding 20 forested hectares were up for sale, he knew he had to have it.

“As a boy, I grew up a mile away from Dunsandle,” says Mr. Goodbody, who runs a flooring company in Galway. “We spent our summers playing in that castle—it was part of my childhood. I couldn’t let someone come in and wreck it.”

In 1995, he bought the roofless and crumbling sandstone castle, along with several acres of forest for £45,000 from the local authorities in Galway, and had originally planned to renovate and live in it. But he soon realized this presented a fundamental conflict.

“In order to maintain the integrity of the castle, I could not make it habitable. I wanted to recreate it exactly like it would have been—and as it was, I would have been pretty uncomfortable.”

Mr. Goodbody, 42 years old, set up scaffolding and commissioned a group of stonemasons from Paris and specialist carpenters from Dublin to restore the unusual counterclockwise spiral staircase (most castles have clockwise staircases that are easier to defend because the guard’s sword hand is free to parry), the arch-beam roof dowelled with Irish green oak pegs, and to refit the so-called killing room—where attackers who had breached the castle doors met their fate. Fifteen years and half a million British pounds later, it still needs work, he says.

The castle (Dunsandle Castle) has been open to the public since 2009, offering guided tours for €6 per adult; and Mr. Goodbody rents it out for events and parties. He admits it has been an expensive project, but then, he says he never did it for the money.

Would he do anything differently? “I might pick a smaller castle,” he laughs.

While sounding dreamy, renovating your own castle can have its share of horror stories.

Rupert Fawcett, head of the Italian team at estate agent Knight Frank International, says he knows of individuals who became deeply involved in a project which left them practically bankrupt. “They love the romance, but the reality can be different,” he says. “The renovation and upkeep of such a building can easily run into the millions, while obtaining planning permission can take years.”

One problem restorers frequently overlook is access to the site, explains James Mott, founder of ProjectBook, a U.K.-based renovating consultancy. “These castles are often totally remote. I’ve seen cases where miles of roads must be built before even thinking about starting work on the castle,” he says, adding that installation of electricity, plumbing and telephone lines frequently present headaches.

Finding the castle in the first place can prove equally difficult, he says. In the 16th century there were around 7,000 castles in Scotland alone, but he says the numbers of castles suitable for restoration have dwindled to a few thousand in Europe.

While there is no list of vacant castles Europe-wide, individual realtors such as Knight Frank offer listings. Currently on the market, Knight Frank is offering several castles, including the €1.9 million Castello di Brancialino in Tuscany, Italy. The oldest part of the Castello was built 1,000 years ago and the site includes a 12th-century church.

Similarly, U.K. agent Chesterton Humberts has several castles on its books, including a 29-bedroom 19th-century château near Paris, for €4.5 million, and an 18th-century château in Normandy with an in-house pâtisserie, for €1.1 million.

Alternatively, charities also can be a good way to find a castle in need of ownership. Save Britain’s Heritage has compiled a register of British buildings at risk. Catherine Townsend at the charity says they have around 1,500 Grade II and Grade I-listed buildings on the register, many of which are castles. “Sometimes they are well-hidden—no-one would notice them for years. Restoring these buildings is a way of bringing life back into the area.”

More often than not, it is a chance encounter on a country walk that sparks a love affair with a ruined castle, Mr. Mott says.

John Mew, an octogenarian retired orthodontist, eliminated the problem of finding a castle by building his own from scratch. “When I set out to build a home, I made a list of the best things about any house. I soon realized what I actually wanted was a castle,” he says.

Mr. Mew constructed the brand new castle, known as Braylsham Castle, in the grounds of his home in Sussex, U.K. Complete with drawbridge, moat and three-story great hall, the six-bedroom property is modeled on a 13th-century Medieval castle with details like the deliberately uneven stone floor and walls constructed 13 degrees off true.

“I got interested in castles after writing a book on social anthropology,” says Mr. Mew. “We are attracted to the old because it makes us feel safe—it has stood the test of time. In this time of insecurity people are yearning for nostalgia.”

Mr. Mew spent around £350,000 building the property and local agents say it would sell for around £2 million in the current market.

Building a castle from scratch, which sidesteps the plethora of problems associated with refurbishing an old property, is unusual. For many, the challenges of subsiding walls and rotting timbers is part of the attraction.

“Owning a castle is the ultimate caché,” says Andrew Hawkins, head of international property at Chesterton Humberts. “We have seen an increase in enquiries over the past six months from couples who have spent careers in the City or big business, and are looking for an active retirement,” he adds.

Former furniture designers Guy Tamplin, 62, and his wife Maddie, 53, had long wanted to escape the U.K. to the South of France for a change of lifestyle. After a two-year search for a property to renovate, they came across the Château de Sagnes in the Tarn region, near Toulouse, in 2000. An old wine château, the house had been uninhabited for more than 40 years and was in a sad state of repair. Without electricity, plumbing or window panes, wisteria was threatening to take over the bedroom. But the Tamplins were charmed.

“We fell in love with the Château de Sagnes at first sight and bought it almost immediately, without knowing much about the local village and area,” Mr. Tamplin says. “The renovation of the main house and gardens took us five years as we did most of the work ourselves, step by step,” he adds.

The 11-bedroom château is part of an estate that includes a four-bedroom manor house, a caretaker’s cottage, a pigeonnier, an old winery, two swimming pools and nearly seven hectares of land.

Although the couple spent about £1 million restoring the château, which they purchased for £400,000, they left some of the rooms in their original state, opting for candlelight over electricity in the dining room. They saved the original silk wallpaper, dating back 140 years. “It was beautifully preserved thanks to the Mediterranean winds whistling through the house,” Mr. Tamplin says.

Resale values of renovated castles can be high. The Château de Sagnes is on the market through Chesterton Humberts estate agents for €2.2 million. “It has been our baby for the last 10 years, but now we are ready to move on to the next project,” says Mr. Tamplin, on his reasons for selling it. “There are always challenges and it is hard work.

Still, the château remains a soft spot, says Mr. Tamplin. “When you sit down with 20-odd friends and family to a candle-lit dinner in the dining room, none of that seems to matter, as every time it feels like Christmas.”