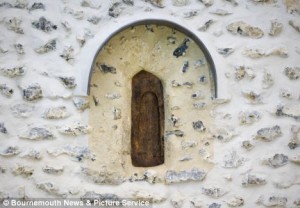 The wooden-framed window was built 1,000 years ago but lay buried in the wall of St Andrew’s Church for about 150 years after it was covered up by Victorian renovations.

It has now been revealed after shocked workmen spotted the distinctive frame while renovating the Saxon building, in the village of Boxford, near Newbury, Berkshire.

Archeologists and historians have studied the workmanship of the window and have found that it dates back to before the Norman Conquest.

It is one of just a handful of windows in the country that pre-dates 1066 but is the only one that opens.

The opening was first uncovered in July this year as the small church underwent restoration.

Workmen carefully removed a concrete render, which had been placed on the outside of the north wall of the church in the Victorian era.

They unpeeled the concrete to reveal a rough-hewn oak frame of the 2ft by 1ft window, containing a wooden panel of the same material which would have been tied using hemp as a hinge.

Stunned church staff called in archeologists and medieval specialists, who determined the method of building the window dated back to well before 1066.

Experts from the Society for the Protection of Ancient Buildings have confirmed the findings and said the window is ‘remarkable in its completeness.’

The window is now fully displayed at the church – one of just five specimens dating back to before the Norman Conquest, and believed to be the only one with a working shutter.

Andrew Plumridge, conservationist and church architect at St Andrew’s, said: ‘It’s really very exciting – it is one of just three windows in the whole of Britain which pre-dates the Norman Conquest.

‘It was discovered during a general restoration programme for the church.

‘A concrete render had been placed outside over the window by the Victorians and was beginning to crack and let in water behind it. 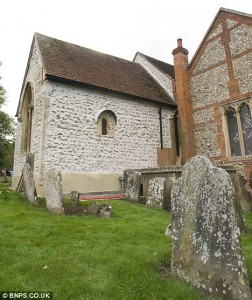 ‘Part of the renovation was to take off the render, but when they took it away they noticed a small window filled with loose flint.

‘We took the flint out to see what was underneath but we were not prepared for what we would find.

‘It is a wooden frame made from oak, with an oak shutter on a string side hinge which probably would have been made from hemp. It has been described rather inelegantly as an ancient cat flap.Although it hold a working shutter, the window cannot open fully nowadays due to an enormous monument on the inside of the building.

Mr Plumridge said: ‘We have decided not to reveal the inside of the window, because there is a huge monument in the way which is too important for us to move.

‘We will leave this for future generations to discover and enjoy.’ Julian Munby, archeological advisor for the Oxford diocese, said: ‘It’s an interesting find and very exciting indeed.

‘It is believed to be a Saxon window, dating back to pre-1066, and is therefore one of the oldest in Britain.

‘The window is cut from a single timber and has a shutter, making it the oldest working window we are aware of.

‘The Romans would have built some windows using glass, but none of these exist in Britain any more.

‘It has been covered up for very many years and was only discovered during building work – it is a very important find.’

Matthew Slocombe, from the Society for the Protection of Ancient Buildings, said: ‘We were hugely excited when Andrew told us of his discovery.

‘This is such a rare and unusual find.

‘It is a great privilege to be able to see the work of a Saxon craftsman who lived more than 1,000 years ago.

‘It’s a delight to see that a traditional, wooden, hand-crafted window can stand the test of time more than a millennia after its construction.’