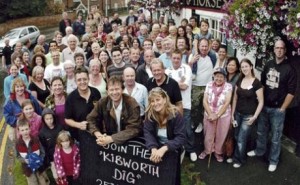 Story of England, which begins on BBC Four tonight, is a very simple idea: to tell the story of one place through the whole of English history, from Anglo-Saxons and Vikings to the Somme and D-Day – and from the point of view of the people, not the rulers. It tries to show the slow organic process through which all our communities have grown over time; how our rights and duties have developed, how waves of newcomers have shaped us and changed us – and how much the people themselves have been the creators of their own story.

And why Kibworth? It’s an ordinary place on the A6 with Chinese and Indian takeaways, a Co-op and housing estates; you might drive through it without a second look. A few miles south-east of Leicester, Kibworth is emphatically today’s England in miniature. In a sense it’s where most of us live today.

I was led to it first by its documents. For the northern part of the old parish, Kibworth Harcourt, astonishing records survive in the archive of the landlord, Merton College, Oxford, covering 750 years in the life of one community: court rolls, rent books, maps, surveys, even a letter from the butcher in 1447. Material so good you can trace individual peasant families over a dozen generations. But the southern part of the parish, Kibworth Beauchamp, also has a fascinating industrial history, with canals, railways and framework knitting factories – making it possible to tell the story of England in one place from the Anglo-Saxons and open fields agriculture to the Industrial Revolution and the TV age.

Kibworth was already a community by 1066, but no documents survive from before that time. So we started off hoping to find a few clues before the Normans. We asked for help on Radio Leicester and 250 locals turned up at the school hall for a big dig weekend. They dug 55 test pits, supervised by archaeologists from Cambridge, and Leicester University. The dig was a success beyond our wildest dreams. We got prehistoric flints, Roman sherds, early and late Anglo-Saxon pottery, all the way through the Middle Ages to the debris of Georgian coaching inns, and frame knitters’ workshops. Then we struck gold with a magnetometry survey by the Hallaton Field group (who had discovered Britain’s greatest Iron Age treasure close by in 2000). In a field where there had been a number of chance finds since the 1860s, the group came up with Iron Age houses – and the complete plan of a Roman villa.

Very soon there was too much evidence to process for a mere TV series. To take the documents alone: the Leicestershire Record Office in Wigston has documents starting in the 1100s, and many unpublished wills from the village among tens of thousands from the county starting in the 1490s; the National Archive has a spread of documents from the Domesday Book through the 14th-century poll taxes and Tudor military musters down to modern censuses and Poor Law records.

Our intention was that the local story would weave in and out of the national narrative. In Kibworth we got Anglo-Saxon finds, Viking place names and a Norman castle; the peasants were involved in Simon de Montfort’s revolution in 1264, they suffered catastrophic losses in the Black Death, and some of them died in the Lollard uprising against Henry V in 1414. In the Reformation the vicar was jailed for his opposition to Henry VIII; after the Civil War the village was touched by radical dissenting movements – Independents, Quakers, Methodists – and a famous Nonconformist Academy was founded here under whose roof the feminist and anti-slavery writer Anna Laetitia Barbauld grew up.

What emerges in the series, I hope, is a sense of the growth of a community over time, with fascinating insights into work, religion and culture. All of it is driven by the primary sources; of these I suppose my favourite has to be the 1940s Kibworth Forces Journal, edited by Leslie Clarke, a veteran of the First World War, which was sent out across the world to all serving villagers from Alamein to Burma. A mix of letters, poems, memoirs and stories, it powerfully sums up the individualistic yet co-operative spirit which has been the glue of English society for so long. Clarke calls it the “Spirit of England”. Involving its schools, its local groups, its people, Story of England is the tale of one community; but it could be any place: it could be yours.