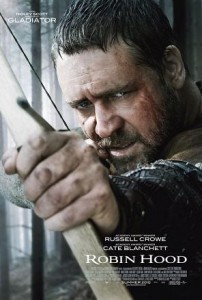 At first glance, Ridley Scott’s “Robin Hood,” starring Russell Crowe and Cate Blanchett, may seem like a most unrealistic treatment of the outlaw of Sherwood Forest. A $200 million production filled with CGI warriors and ersatz ancient castles made of fiberglass, Scott and Crowe’s “Robin Hood” in some ways resembles Scott and Crowe’s “Gladiator,” but without the togas.

On the other hand, “Robin Hood,” which is out this week in single disc, 2-disc and Blu-ray Combo Pack versions from Universal Studios Home Entertainment ($29.98/$34.98/$39.98, rated PG-13), contains scenes and images that are remarkably true to medieval life. Crowe, who also produced the film along with Scott and Brian Grazer, isn’t exaggerating when he says on the DVD documentary “Rise and Rise Again: Making Ridley Scott’s ‘Robin Hood,'” that his film is “historically accurate in terms of what the cultural milieu was that the Robin Hood character could rise out of.”

Robin Hood is, of course, a fictional creation. But the feats of the legendary outlaw have often been presented – with varying degrees of historical accuracy – alongside real historical figures (England’s King Richard, his brother John and mother Eleanor of Aquitaine) and genuine historical events (the Crusades, the signing of the Magna Carta). This version of “Robin Hood,” while providing its own quirky take on those figures and events, differs from previous ones in that it tells what Crowe calls “the untold story of Robin Hood” – in essence, his transformation from Robin Longstride, the son of a stone mason and an archer in King Richard’s army, into a leader of English soldiers against an invading French army and, finally, into a rebel against the rule of the tyrannical King John.

Much of the value of this “Robin Hood” resides in the production’s attention to the look and feel of England at the turn of the 12th century. Common soldiers are filthy and profane ruffians. Warfare is exceptionally brutal, fought with swords, arrows, boiling oil and fire. Life in England, except for the wealthiest, is hard, with most people living in ramshackle huts, barely surviving. Even those with land and titles, like Sir Walter Loxley (Max von Sydow) and his daughter-in-law Marion (Blanchett), whose husband Sir Robert Loxley (Douglas Hodge) is off fighting with King Richard, face grain shortages, do arduous agricultural labor and live in cold, barren, vermin-infested castles. The aforementioned hour-long documentary “Rise and Rise Again” does a fine job in demonstrating how all of this was created.

At the heart of most Robin Hood movies is the evolving relationship between Robin and Marion, and the chemistry between Crowe and Blanchett (Australians who had known each other for years but had never worked together before) is one of this version’s strengths. Crowe brings his usual combination of manliness and depth to the task, playing a commoner who fraudulently takes the name of Sir Robert Loxley in order to journey from France (where he is fighting with King Richard on their return home from the Crusades) back to England so he can bring news of Richard’s fate to Prince John and return the late Loxley’s sword to the nobleman’s father (von Sydow).

At the Loxley castle near Nottingham he meets Marion (Blanchett), Loxley’s widow. This Marion is not a maid; rather, she’s more like a fearless 20th century feminist who oversees the family’s 5,000 acres estate, fights as well as (almost) any man and resists the elder Loxley’s plea that she remarry so that she can retain the land after his death, as only men were allowed to inherit land in medieval England. Only an actress as skillful and intelligent as Blanchett can make this historically anachronistic character plausible.

An outlaw who steals from the rich and gives to the poor can be viewed as a left-wing, progressive hero, while a nobleman who rebels against cruel and inequitable taxation might carry a conservative or right-wing banner – and different versions of the Robin Hood story have reflected these different perspectives. Scott’s “Robin Hood” has its own interesting take on the political implications of the oft-told tale.

Here, the regional barons and nobleman of England are being bled by excessive taxation to pay for Richard’s overseas battles and John’s venality. But Scott also presents Robin Longstride as a man with a social conscience. Robin bravely tells King Richard to his face that he’s ashamed that some of their army’s actions during the Crusades involved the slaughter of thousands of innocent women and children. Later, Robin learns that his late father had actually (though implausibly) been a strong proponent of the rights of ordinary people against an all-powerful ruler; in fact, old man Longstride appears to have written the first draft of what became the Magna Carta. In addition, both the monarchy and the Church are singled out in Scott’s film for their selfishness and lack of concern for the needs of the common people, and a raid on Church-owned grain seed led by Robin and his men is presented as the just response to such greed.

This Robin is also an English patriot, and much of the film concerns Robin’s resistance to the efforts of France’s King Philip and his henchman Godfrey (Mark Strong), a traitor who has become a key adviser to John, to conquer a divided England.

Despite containing at least one too many gory battle scenes and several historical howlers, Scott’s “Robin Hood” does succeed as a well-told adventure story with realistic and provocative subthemes about English culture and society. And the Blu-ray and DVD versions add considerably to a viewer’s enjoyment of it.

All three editions include both the theatrical cut of the movie and an unrated director’s cut which adds about 15 minutes to the film. The Blu-ray and 2-disc editions add deleted scenes, a collection of behind-the-scene photographs and interviews about the design of the film and, most importantly, a lengthy documentary on the making of the film – from pre-production planning and casting through the shooting of the movie and the post-production editing and scoring. Finally, the Blu-ray edition includes a marvelous “Director’s Notebook” function, a multi-screen feature where at various points in the film, as the movie proceeds on one screen Scott and others discuss pertinent aspects of the film on an adjoining screen.