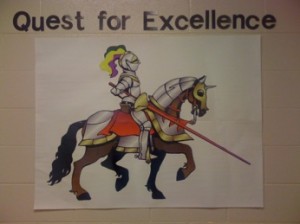 Armored knights on horseback darted around the Victoria Community Center making swirls of dust and shouting to hundreds of elementary spectators, Monday.

“I invite you to join us in a movement of nobility and character,” said Sir Randall Parr, CEO of Knights of the Guild, as he pranced around on horseback. “And say, ‘I’m going to devote myself to becoming a knight who will serve my community and make them proud of me and make my family strong.’ If you do this my friends, Victoria will change.”

The presentation was part of the EarlyAct FirstKnight character-building program and sponsored by Victoria’s three Rotary Clubs and the school district. More than 900 students from Torres, F.W. Gross and DeLeon elementaries attended the two presentations.

“We’re going to get these kids pumped up today so they’ll get ready to kick off that program full-steam this coming week,” Parr said.

The knights caught striped rings on their jousting lances while galloping at full-speed toward each other.

“They kind of changed the world back then,” said Olivia Mahan, a fourth-grade F.W. Gross student, about the knights. “They helped people to notice what things were good.”

Last year was the program’s first time in the district. This year Rotarians helped expand the EarlyAct FirstKnight program into the DeLeon and F.W. Gross schools.

Students are given 10 minutes of instruction a day on character building and raise money for charities. Last year Torres Elementary raised more than $12,000 for charities, something administrators believe helped unite the students.

“It really helped them all bond together for one central purpose,” said Sherry Gorsuch, school principal.

The knights wove an anti-bullying story into their mounted performances, and in the end a squire was knighted after sparing a mischievous bullying knight in a sword fight.

The knights believe the message resonates with kids because it shows a dramatic real-life bully situation.

“It really kind of paints a picture – the way it’s portrayed – of what to do,” said Cass Garcia, who also goes by Sir Cass, a former Victoria resident. “We really advise using fighting as a last option.”

Olivia believes the message was clear.

“Some of my friends are kind of bullies so if I ever see them bullying someone again I’ll kind of look back at this day and tell them to stop doing that because it could be something really hurtful to them,” she said.