Battle games at Brookside: Clans of Aberdeen members fight like knights in days of old 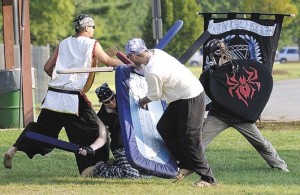 On Monday and Thursday nights at Brookside West Park, swords strike flesh, arrows fly and welts are raised — all in the name of fun.

It’s the Clans of Aberdeen honing their battlefield skills, venting aggression and turning a few heads.

Dwight Thomas and Dave Potting — both transplants from Medina County — started the group last year. They had been involved in Medieval and Dark Ages battle games there and hoped to generate interest in Ashland.

The group has grown to about 10 members. Most became interested after they happened upon the twice-weekly skirmishes at Brookside West Park. Foam-padded weaponry and instruction is provided for anyone willing to try it.

“Most of the time, after just one time of fighting, they’re hooked,” Thomas said.

The sight of people dressed in period costume, wailing on each other with swords does turn heads. And, at first blush, trying to learn why they’re doing it is enough to make anybody’s head spin.

Thomas, 28, who’s been involved in full-contact live-action combat for about nine years, started by explaining what the Clans of Aberdeen are not. He stressed that, unlike some groups, they aren’t into magic or tap-fighting.

In tap-fighting, he explained, participants merely touch opponents with their weapons and declare that they have been smitten or that some sort of magic spell has been cast on them.

In his book, that would be to battle games what tag is to tackle football.

“We’re a lot more into the physical stuff, medieval fighting,” Thomas said. “A lot of people don’t understand the physicality of it.”

The homemade weapons are padded with foam and players generally wear no protection, although some degree armor is allowed.

To protect players, there are strict rules for making and padding weapons. They are carefully checked before and between skirmishes to prevent injury.

Injuries from weapons are rare; most result from running, falling or hyperextension.

The weaponry runs the gamut from swords to catapults.

“It’s anything you can create in a safe manner that will throw foam,” Thomas said.

There are limits to the size and torque of bows, however.

The fighting is full-contact with sword and shield bashing and grappling allowed. Hits are scored for blows to the torso and limbs. The head is off limits in hand-to-hand combat. A player is declared dead when the opponent racks up a certain number of points based on the type of weapon used and the part of the anatomy hit.

Unlike real-life combat, dead players are eliminated only for the duration of the skirmish.

As for the concept — kind of like the battles themselves — just about anything goes. Players create their own personas and costumes based on history or fantasy, such as J.R.R. Tolkien’s “Lord of the Rings.”

Basically, the historical period falls within Medieval times or the Dark Ages. How true the characters remain to their personas tends to vary from group to group.

Thomas, whose character is a Scotsman named Higlar MacThomas, is in it more for the fighting.

He has been sidelined this summer with a knee injury. Ironically, that happened at work and not on the battlefield. For now, Thomas limits his participation to heralding (serving as a referee for battle games) and training new recruits.

Andrew Lentz, 23, of Ashland is one of them.

Lentz joined the group in mid-summer. He goes by the name Lucas, which he pronounces “Rucas.”

“I was here one day doing a nature walk with some friends and saw these guys and I wanted to laugh at them closer,” Lentz said. “We came over and picked up the weapons and the rest is history.”

Brock Daugherty, 20, of Ashland picked up a sword and started fighting with the group four or five months ago. His older brother got him interested in it.

“I’ve been a fantasy nerd forever,” Daugherty said. “Plus, I have violence issues; this gives me a good excuse to hit people.”

Thomas agreed that battle games provide a good outlet for aggression with the added benefit of building stamina.

“At events, you can be fighting 6 to 8 hours a day,” he said. “I try to impress on the guys that they need endurance if they are going to participate in national events.”

Members of local groups test their mettle — and foam — at national and local events. They frequently travel to other towns to spar with other groups.

Thomas hopes to get the Clans of Aberdeen involved in more of that.

But it’s not all about fighting.

“We’re pretty good friends,” Thomas said. “Usually, after practice, we’ll go out to Denny’s or go to my house and grill some food.”