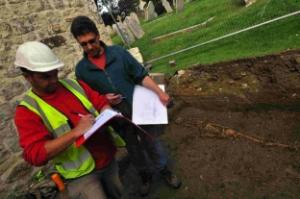 Medieval skeletons have been uncovered during the first stage of £200,000 building work to revamp a church in Chickerell.

Archaeologists were called in when the remains of two children, thought to be from as early as the 13th century, were found close to the main building of St Mary the Virgin Parish Church.

Builders had expected to uncover remains during their work to create a two-storey extension on the former vestry site but not so close to ground level.

Care is now being taken to record the skeletons as they were found and to re-inter them elsewhere in the churchyard.

He said: “Years ago, they used to bury bodies quite close to the church and there were no regulations then to what depth.

“Part of the permissions to do the work here is they had to employ archaeologists to monitor the work.

“We were expecting to come across remains but we didn’t expect to hit burials quite at this level – when the foundation trenches are only two and a half feet deep.

“They’re juveniles and they are highly likely to belong to medieval times just because the church itself is medieval and the positioning is this close to the church.

He added: “We will record them and draw them, then they will be removed and reburied in the churchyard to allow the builders to carry on digging.”

The Rev Richard Press said: “At the end of the day, however old these skeletons are, they’re people and we have to remember that.

“They will be re-interred in the churchyard.”

Mr Press added that he was ‘delighted’ the ‘much needed’ work to build a new larger vestry, toilets, kitchenette and meeting room above it, was under way.

The improvements cost more than £200,000 and are being funded by the church from the sale of its former church hall at Higher End, Chickerell, which was sold to developers after it had asbestos problems and had to be closed.

The second phase of work to install under-floor heating will begin at the end of the year.

Bricklayer Mike Kiddle was among the builders from David R White Building Services who uncovered the remains.

He said: “It was a bit of a surprise, we were expecting to find remains a lot deeper than that.

“It’s not every day you see something like that from the medieval times and it’s definitely getting a bit of interest.

“Hopefully, we’ll have this built by Christmas then we’ll be working to put under-floor heating inside.

“The chances are we might find some more in there as well.”