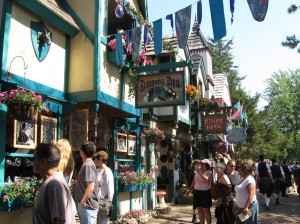 Sitting in the parking lot slathering on sunscreen, Best-Ever Friend Dave and I realized we weren’t in Kalamazoo anymore and not even in this century.

At the car in front of us, a woman was tying a raccoon’s tail on the back of her billowy black and red dress from another era. Down the way, another woman was dressed in a beautiful brown and gold gown just right for a ball with Queen Elizabeth I.

We arrived a few minutes before the 10 a.m. opening and already there was a crowd. How would we ever find my niece, Crystal, and her husband, Mark? Lo and behold, Crystal saw us when she entered the castle courtyard.

Crystal and Mark are fans of Renaissance festivals, but this was their first time at the Michigan event, which will run weekends through Oct. 3. But Crystal knew where we should go first, to hear a favorite group of hers, Tartanic, a bagpipe and drum band.

As we waited for its performance, we looked over the festival map and schedule of events, where I counted 21 stages, each with performances scheduled about every half hour, all daylong.

Tartanic was a good introduction to the entertainment. Upbeat and funny, it played mean bagpipes and drums, ending with a beautiful rendition of “Amazing Grace.”

At all of the stage performances we saw, audience participation was the name of the game, from booing and oohing to actually helping out with the performance. Mime Ric Roc Zoo (a.k.a. Rick Carver) had children and adults playing kazoos, banging on a gong, or giving out a loud moan as he directed them in some sort of bizarre chorus. The audience loved it.

In between the stages, there are plenty of shops where you can outfit yourself in colorful Renaissance attire or buy leather belts, purses, kilts, candles, crystal dragons, pottery, jewelry, and the list goes on and on. Vendors are dressed in period attire and greet you with the appropriate “M’lord” and “M’lady.”

It’s also fun to sit and just people-watch. Many women were attired in very elaborate, fancy gowns while others were dressed as tavern wenches. The men wore pantaloons, vests and floppy hats. And since the weekend theme was “Highland Fling” when we were there, men wore kilts.

Even one dog got into the spirit dressed in a green plaid neck scarf and kilt.

In the special-events area, Highland games were being held where muscle-bound men in kilts threw boulders in a competition called the “stone put” to see who could throw the stone the farthest. Another competition was “weight over the bar,” where the men threw a weight over the bar. I cringed as the weight seemed to almost hit a spectator.

Getting out of the sun in a nearby tent, we watched the Festival Parade (held daily at 12:30 p.m.), during which performers and costumed vendors accompanied by a kilted bagpipe band march around the festival grounds.

There are lots of places to eat. Many festival-goers were gnawing on huge smoked turkey legs. Not too many were eating Scotch eggs — a hard-boiled egg wrapped in a sausage meat, coated in bread crumbs and then deep-fried.

Our choices were more mundane, a chicken sandwich for me and an Italian sausage sandwich for Dave. Both were delicious.

If you want to splurge, you can opt for a six-course luncheon at noon in the Castle at a cost of $55. There’s also the Queen’s Royal High Tea at 4 p.m. in the Castle, for a cost of $15 per person.

One last thing we wanted to see was the jousting, so we went to the Upson Downs Joust Field after lunch. Knights paraded around the field on their huge horses prior to the event, to drum up support from the audience.

When it was time to start, the Queen introduced each knight, drawing boos and hurrahs from the crowd. With their lances, the knights snagged rings held up by the pages. Then, things got really serious as they tried to knock each other off their horses by slamming their lances into the other knight’s shield. It was all very carefully choreographed, but still fun to watch.

To travel back into time, you don’t need H.G. Wells’ time machine, just a four-wheeled machine that in a couple of hours will zip you over to the Michigan Renaissance Festival.