Weekend festival at Fort Langley will turn back time 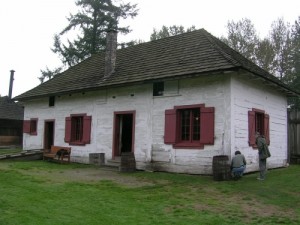 Since Fort Langley’s the seat of B.C. history, it seemed appropriate to hold a weekend festival in the community, a first for a newly formed group for history buffs.

The Historical Mythological Fantasy Society (HMFS) started in the U.S. Its founders have moved to Abbotsford and are starting chapters in B.C. While similar to other historically based groups, the HMF allows the addition of historical fantasy with an emphasis on making a family-friend organization. The focus is on ancient times to about the 1600s.

To kick it off, they have organized the Gathering BC for Saturday at the Fort Langley Lions Hall and the Chief Sepass Theatre.

Alexandra Halliday, one of the organizers, said Fort Langley was chosen because of its history and location.

“Fort Langley is a nice middle point,” she said.

Saturday’s historically themed multicultural festival features performers at the theatre and medieval style activities at the hall and its grounds.

The price of admission comes with tokens that can be redeemed at activities. People can make a coat of arms or learn about healing herbs, try archery or make a tunic.

The Fort Wine Co. is doing a wine tasting there and there will be several other merchants. Abbotsford air cadets will also be having a hot dog sale midday at the festival as a club fundraiser.

“We are using the local talent,” Halliday said. “We’ve tried to invite as many [performers] as possible.”

People can dress of the era if they want. The event starts at 10 a.m. and runs to 10 p.m. for those attending the feast.

Halliday said they have arranged a historical menu and the food will be organic. Tickets are $10 for the meal, and can be ordered by emailing through the website or purchased at the festival. People can also purchase a glass of wine but because this is a family event, no rowdiness or drunkenness will be tolerated.

On Sept. 19 the group is hosting a launch event for the HMP Empire at the Lions hall. It is for people interested in joining the group that will be devoted to medieval history, arts, warfare and more. Entry will be by donation with the proceeds going to the HMP Empire. More information about the empire is at HMF Empire.

Tickets are $8 adults, and $5 children, (five and younger get infree). More information and ticket ordering is available at The Gathering BC. Organizers ask people to buy their tickets online in advance of the festival.