Jousting, swordplay are on display at Tulare County Fair 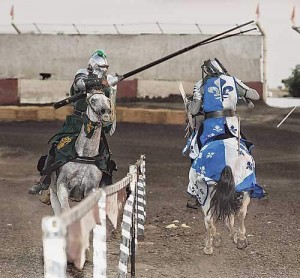 Tulare County Fair visitors are discovering that the Medieval Tournament of Champions, a clash of armored knights on horseback, is an interactive affair.

While the 12-foot lances are reserved for competitors, audience members are invited before the nightly battles to engage in various archery- and hatchet-throwing activities, with wooden swords and shields as prizes.

On Thursday, families interacted with the four knights, their four squires and others involved in the show.

Among the fans was 3-year-old Game Ruiz, who received a flower from a chivalrous knight.

“She wants to be a princess,” said her mother, Maria Cordoba of Visalia.

She picked the right attraction.

“The edge is designed to stick into the wood no matter which end gets there first,” Cooper said.

The Medieval Tournament of Champions is operated by Greg Hopla of Brownsville, Ore. Hopla — also known as Sir Gregorio, a gold-clad Germanic knight of the 12th century — called jousting an “art from a bygone era.”

While the tournament centers on the joust, in which knights clash with shields banging and lances splintering, there also are well-choreographed, spark-generating swordfights and crowd-pleasing demonstrations of horse riding skill.

Four colorful knights from Brittany, Germany, Scotland and France are featured. On Thursday, the French knight, known as Jean-Luke Lafitte, was de-horsed twice but appeared unharmed. A 7-foot, armor-encased emcee known as Sir Ray Sancho described the action with a booming baritone voice.