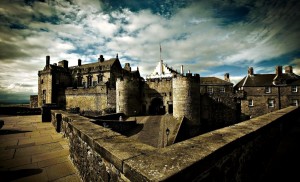 The secrets of medieval skeletons discovered at Stirling Castle will be revealed during an evening with forensic anthropologist Professor Sue Black and archaeologist Gordon Ewart.

The skeletons were part of a group discovered by Mr Ewart and his team when they were excavating a lost royal chapel at the castle.

Two of them – a knight and a woman – attracted international headlines when they were featured in the recent BBC 2 ‘History Cold Case’ documentary.

The programme followed Prof. Black and her colleagues from the University of Dundee as they used the latest scientific techniques to discover more about the skeletons – the sort of people they belonged to, their lives and brutal deaths.

Both had suffered severe wounds from medieval weapons and may have died during the Wars of Independence with England.

The ‘Secrets of the Skeletons’ talks will take place in the castle’s Great Hall on Wednesday, September 22.

Prof. Black said: “The expertise and equipment available at Dundee University allowed us to use 21st century scientific techniques to find out much more about the skeletons than was known before.

“’History Cold Case’ attracted an enormous amount of interest so I’m really looking forward to the talk at Stirling Castle, where the skeletons were discovered.”

A facial reconstruction of the knight and controversy over whether he might have been brought up in England, Scotland or France attracted headlines from India and Africa to North and South America.

Mr Ewart, who runs Kirkdale Archaeology, will talk about the work he has done over many years to explore the past of the castle and its royal palace.

Burials in a location of this kind were unusual and suggest extreme circumstances, such as a siege or plague, which made it dangerous to leave the castle.

It is likely that only people of high status would be buried in such a prestigious place.

Mr Ewart said: “Stirling Castle is one of the most remarkable places in Scotland.

“It was at the heart of the kingdom’s affairs for centuries and since the 1970s I have been involved in a series of archaeological projects to discover more about its past.

“It will be a pleasure to talk about the work we have done and the insights which archaeology has given us into the castle, the skeletons and, more recently, the royal palace.”

The investigation of the palace by Mr Ewart and his team has been of fundamental importance to Historic Scotland’s £12 million project to return the palace to how it may have looked in the 1540s.

Refurbishment work is currently underway and the palace will reopen to the public next Easter.

In addition to ‘Secrets of the Skeletons’, Mr Ewart and his colleague David Murray will give a series of presentations about their work on the palace on the weekends of the September 18-19 and 25-26 at 11am and 2pm in the nether bailey.