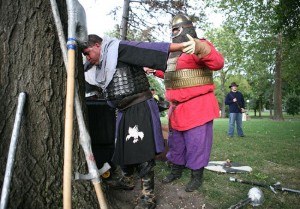 In 1966, knights were summoned to defend the honor of their ladies in a tournament meant to revive the Middle Ages.

Donning pointy hats and armed with trash can shields, a clan of UC Berkley’s history buffs and science fiction zealots set off for a rendezvous in the park. With the clink of their makeshift swords and an ardor for the Dark Ages, the Society for Creative Anachronism was spawned.

“We have come a long way since the pickle barrel armor,” said Deborah McDuffy, also known as Lady Emma bat Avraham, president of Columbia’s chapter of the SCA, Shire of Standing Stones.

Composed of 19 Kingdoms spanning the world, the SCA is an international non-profit historical foundation with a mission centered upon researching and re-creating the arts, skills and traditions of pre-17th century Europe.

Upon entering the society, each member takes on his or her own persona — not only a name, but a whole character embodiment derived from some aspect of medieval history. McDuffy was inspired by the fashion in the 12th century.

“I looked at history, and I really liked 12th century England — what was going on and the garb,” McDuffy said. “I got to choose what clothes I looked good in and what clothes I could make.”

Members are able to dabble in whatever activities arouse their interests, including, but not limited to, combat, archery, dance, music, art and culinary arts.

For MU employee Robert Schuster, the SCA offers a perfect concoction of sports and fantasy.

“I was an old Dungeons and Dragons fan and football player,” Schuster said. “Where else can you find a combination of the two?”

Schuster has been involved in the SCA since the ‘90s, and it is not unusual to find SCA members who have been involved for 20 or more years.

“The SCA provides that sense of family, and I think that is what draws and holds most people in,” McDuffy said. “A while back my car broke down and because I had the SCA sticker on my window, another member stopped to help me out.”

During their activities, the SCA tends to attract the attention of curious onlookers.

“Of course we get a lot of stares,” McDuffy said. “What I find most interesting is the people that don’t look. I mean, come on.”

Luckily, SCA members have a very positive attitude about the curiosity they receive.

“Any member of the SCA is happy to explain,” McDuffy said. “We will talk your ear off if you let us.”