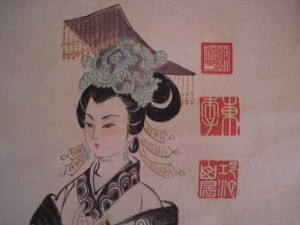 Four European-looking warriors and lion-like beasts are engraved on an empress’s 1,200-year-old stone coffin that was unearthed in Shaanxi Province, in northwestern China.

Ge said one of the warriors was very much like Zues, the “father of gods and men” in Greek mythology.

The coffin was also engraved with deer, tigers and goats.

“It’s noteworthy that goats signify tragedy in Greek mythology. The word ‘tragedy’ itself means ‘song of the man-goat singer’,” he said.

He said the tragic element coincides with the empress’s unhappy life: several of her children died young and she herself lived constantly in fear.

The elements of Greek mythology on Empress Wu Huifei’s coffin suggest cross-cultural exchange was common in Chang’an, capital of the Tang Dynasty, located in today’s Xi’an, he said. “There could have even been clergymen from Western countries serving in the Tang imperial court.”

Wu Huifei was Emperor Xuanzong’s favorite concubine and was posthumously known as Empress Zhenshun, meaning “the virtuous and serene empress.”

Her sarcophagus – 4 meters long, 2 meters wide and 2 meters high – was stolen from her tomb in the southern suburbs of Xi’an in 2006.

Police said it was then smuggled out of China and sold to a businessman in the United States for 1 million U.S. dollars.

It returned to China in April and has been housed at the Shaanxi History Museum from June.