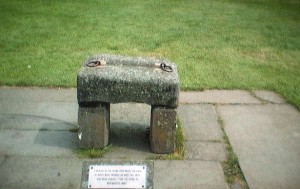 Archaeologists studying the famous Moothill have pinpointed the origins of the ancient inauguration mound for the first time.

The new discoveries came from radiocarbon dating of samples retrieved during excavations of a massive ditch which once surrounded the site in the grounds of Scone Palace.

Tests have indicated that the mound where ancient Scottish kings were crowned was created more than 1000 years ago … meaning that its quarry ditch was completed shortly before the late-Ninth to early 11th Century.

The true origins of the massive earth mound, which stands opposite the residence of the Earls of Mansfield, has long been the subject of debate.

The new discoveries have been made possible by an archaeological research project that has run for five years.

Led by Dr Oliver JT O’Grady, a team of experts have attempted to find out more about the origins and development of Scone since 2005.

Dr O’Grady said: “Scientific studies on the artefacts and samples recovered during excavations in 2008 and 2009 have been ongoing since last year.

“This has thrown up fascinating revelations about Scone’s history, but the new dates from the Moothill are by far the most significant discovery to date.

“The radiocarbon dates confirm Scone’s Moothill as one of Europe’s extraordinary survivals, unique in Britain and the first assembly-mound in Scotland to be scientifically dated.

“The lab results are in a sense nothing less than a birth certificate for Scotland.”

One ancient tradition recounted that Moothill had been created by soil brought to Scone in the shoes of nobility who came to give homage at Robert Bruce’s crowning in 1306.

Alternatively, past commentators had speculated about the possible prehistoric origins of the mound.

Archaeologists from the Scottish Universities Environmental Research Centre laboratories in East Kilbride are now working with Scone Palace to plan further projects, which could involve larger excavations of the medieval abbey and areas of the Moothill.

This will aim to understand the estate’s important heritage in greater detail and help present the archaeology to public visitors.

Scone Palace remains open to the public until October 31.