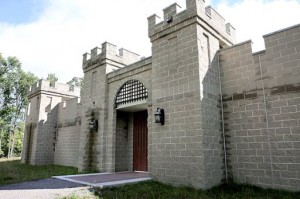 When out-of-town visitors stopped in Merrifield to ask directions to the nearly $2 million castle nearby they were met with disbelief.

Nate Phillipps is working to change all that and a medieval fair in November will give people a chance to see the castle up close.

Complete with banners, knights in armor and even a mural with a dragon, the $1.7 million Miller Castle was built in 2008 on the Parker Scout Reservation near Merrifield. A list of benefactors appears in a scroll format inside the castle’s main entrance noting the fortress as the James and Marion Miller Medieval Castle.

Phillipps, the district executive for the Boy Scouts of America, Central Minnesota Council, walked along the path leading to the castle on the Parker Scout Camp just outside of Merrifield.

The idea for the castle was born as the camp looked to build a storm shelter and decided to create one with a twist. The castle has room for 64 Scouts and 16 adults. When the building isn’t in use by the Scouts, it is available for rent to nonprofits and community groups for meetings or weekend retreats.

The castle has towers and a Great Hall with a mural on a stage area of a knight on horseback, a wizard and a dragon in a castle setting. The mural actually covers a garage door that opens to the walled courtyard. The opposite side in the courtyard becomes the backdrop for an outdoor stage with jousting knights on horseback.

The castle theme is carried on throughout the building’s main floor with rooms for knights, stewards, lords, ladies and squires. But today’s technology is present in the projector for movies, in the commercial kitchen and even with mounted hair dryers in the bath areas. The building is available for use year-round with air-conditioning and in-floor heating.

A divider in the bunk room allows for segregation of the genders in the event of a group with boys and girls is staying in the castle.

Phillipps said the 12,000-square-foot castle is mainly used by Cub Scouts who may find outdoor camping a bit too rigorous for their younger age. He said older Boy Scouts are typically camping in the outdoor setting.

One of the motivations behind construction the castle was to assist in recruitment and to spark the interest of youngsters. Phillipps said telling the boys they have the option to stay in a three-story castle is a draw. The walk-out basement is unfinished but there is talk of constructing a “wacky science lab” in the space. There is room in the lower level to double the upstairs quarter with space for another commercial kitchen and sleeping quarters. And there are long-term plans to create other buildings on the wooded property such as a wilderness frontier and Native American setting. The Parker Scout Reservation has 256 acres.

“We’re still relevant,” Phillipps said of the core values of the Boy Scouts. And Phillipps said work is ongoing to use technology to stay relevant with the changing times while still honoring the Scout’s 100 year history. Updated uniforms were unveiled last February to mark the Scout’s centennial.

Phillipps, 24, has been in scouting since he was 6. The Eagle Scout from Grantsburg, Wis., said he came home with a flyer and told his dad he wanted to be an Eagle Scout.

He learned how to tie knots and survival techniques when camping. And, he said, review boards for advancements along the way were helpful in preparing for job interviews later.

“It’s also more than that,” Phillipps said of his experience in the Scouts. “You learn a lot of skills. It’s not just the knot-tying.”

He cited leadership, public speaking, decision making, problem solving, and taking responsibility for one’s actions. Phillipps said he learned to plan and set goals. “That’s all stuff I didn’t realize I was being taught.”

For more information, go online to www.bsacmc.org and look for the link to Camp Parker, or go online to Boy Scouts of America.

The medieval fair is planned Nov. 4 with scout leaders expected to be on hand to talk about programs and raise awareness of Scouting in the area.