History of Catholicism is shown in Vatican art 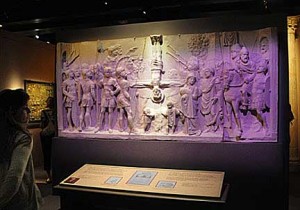 A framed illustrated description of the “Foundations of the Church” informs visitors that the “Vatican and Catholic Church grew out of the events described in the New Testament: the story of Jesus, the Holy Family and the Apostles.” This “revelation” as well as the notation that follows that “Jesus’ birth is fundamental to the history of the Catholic Church” should be information that everyone is aware of. What visitors need to discover, however, is how these iconic figures have been the focus of much of Western art across the centuries.

The entrance to the Missouri History Museum at Lindell and DeBaliviere faces the 1,370 acres that is Forest Park, the seventh largest urban park in the US and about 500 acres larger than Central Park in New York City. A replica of a papal Swiss guard in uniform, a 20th century halberdier, greets visitors as they approach the “Rise of Christian Rome,” the first of many “galleries” within an exhibition containing artworks, historical objects and cultural artifacts from the Vatican collection that to date has spanned 4,500 years.

Vatican Splendors, A Journey Through Faith and Art opened at the Missouri History Museum in Forest Park, St. Louis last spring and still attracts a significant number of visitors. The collection of art and artifacts organized in topical galleries and presented in two sections of the museum provides insight into the 2,000 year history of the Vatican and its important role in creating and preserving Western art. The exhibit includes major works created specifically for the Church.

Visitors first are presented with a video of the Vatican with exterior and interior views. Included are images of Saint Peter’s Basilica with footage of the Scavi–the necropolis below where the original tomb and bones of Saint Peter were found. Shown above, visitors are viewing “The Creation of Adam” by Michelangelo circa 1511, a glimpse of a section of the well-known fresco on the Sistine Chapel ceiling depicting God touching Adam.

As visitors wander past the displays they witness the progression of Roman art to Christian art. Pope Boniface VIII (1294-1303), a major patron of the arts, was credited with taking it from medieval iconography to Renaissance enlightenment.

Credited with being one of the most famous works of medieval art was the mosaic by Giotto di Bondone (1267-1337), the “Navicella di Giotto” or Boat of Giotto. A fragment of the work was displayed.

Scenes of salvation become reminders to the faithful that they don’t worship alone. Several oil paintings depict the Virgin Mary, the Madonna, apostles and saints. Guests seemed especially moved by Guerchino’s very vivid head portrait of Jesus and the crown of thorns dripping blood– possibly, for some as a reflection of their own suffering.

Among the displays was a reliquary that showed elaborate floral sculpting topped with a crown and cross. A “reliquary” (“that which remains) was prized due to its direct contact with a holy person or the body of a saint. These reliquaries became aids to prayer.

“Look at the way the eyes follow you. Isn’t that something?” were remarks made over the Portrait of Ezzelino da Romano by neo-classical artist Antonio Canova. Ezzelino was a medieval warrior and a really evil feudal lord.

Evident is the use of guilding, especially seen in the portrait of St. John the Baptist by Marcantonio Aquili (1465-1521). The skillful use of perspective is seen in the massive painting by Viviano Codazzi, “The Adoration of Shepherds.” Never before seen outside of the Vatican is a 17th century rendition of “The Martyrdom of St. Sebastian” who was killed for his Christian beliefs by the Roman emperor Diocletian. The wounded saint is depicted being administered by Irene, the widow of St. Castulus.

Christian architectural style was jump started by Emperor Constantine who ordered construction of several places of worship (it helped that he saw a cross in the sky that aided in his conquest of Maxentius in 312 AD). Thanks to Constantine common people were allowed places of worship, not just those reserved for popes. Above is a photo of a diorama of Constantine’s Basilica constructed in the 4th century.

A visitor stands before a reproduction of Michelangelo’s “La Pieta” completed in 1499.

The Virgin Mary was depicted as a young woman, according to Michelangelo’s own explanation that she was “so pure..she never aged.” Interestingly, no mention was made of “La Pieta” housed today behind bulletproof glass in St. Peter’s Basilica in Vatican City after it was attacked in 1991 by a crazed man named Laszio Toth using a hammer. The original–probably not the reproduction–has brought many onlookers to tears.

Visitors pass through an area that reproduces the scaffolding used by Michelangelo to complete the fresco on the ceiling of the Sistine Chapel.

Michelangelo lay on scaffolding 68 feet from the floor, no doubt, with aches and pains and paint dripping on his face. During the four years Michelangelo took to paint the ceiling, the artist had a fiery relationship with Julius II, a pope who otherwise was instrumental in furthering the accumulation of precious art.

The Council of Trent (1545-1563) and Pope Paul III met and established guidelines for art–that it should be created in the service of faith to deliver Christianity to the common folk. The council especially concluded that the art of Bernini, who designed the piazza of St. Peter’s square, inspired piety. The advent of Martin Luther who had been disappointed over the shallowness of Roman piety and the financing of the new Basilica through the sale of indulgences which allegedly reduced suffering after death, was its inspiration.

Every genuine art form in its own way is a path to the inmost reality of man and of the world. It is therefore a wholly valid approach to the realm of faith, which gives human experience its ultimate meaning.–John Paul II, 1999

Following a gallery devoted to the Church’s missionary outreach, is a section devoted to papal portraiture. Photography, it was noted, gained significance with the work of Arturo Mari, the official Vatican photographer. The photograph of John Paul I was particularly significant since he died soon after being crowned and consequently had not sat for a painter. With the portrait of Pope Pius XII is the “disclaimer” that recent assessments of his papacy focused on his reluctance to denounce the Nazi regime or to condemn the extermination of the Jews.

In the contemporary section of the popes is a portrait of Benedict XVI and the bust of the late John Paul II and his bronze hand upon which visitors were asked to place their own hand, if they so desired. Many were hesitant.

A pearl inlaid replica of the Cathedral of Amman, a gift from Jordan in 2009, suggests that a dialog was being made between Christian and Muslim theologians. In November 2009, the tenth anniversary of John Paul II’s Letter to Artists, Pope Benedict XVI had convened a meeting in the Sistine Chapel with 262 contemporary artists reasserting the power of beauty in art.

The art object exhibits were organized and circulated in conjunction with the Congregazione per l’Evangelizzazione dei Popoli of the Vatican City State. The exhibition in St. Louis is produced by Evergreen Exhibitions in association with the Missouri History Museum. Objects in the exhibition are on loan from the The Reverenda Fabbrica of Saint Peter, the Basilica of Saint Paul Outside-the-Walls, the Basilica of Saint Mary Major, the Vatican Library, the Congregation for the Evangelization of Peoples, and the Apostolic Floreria. Additional objects are on loan by the Papal Swiss Guard and private collections.