A New Theory on the Origin of the Lewis Chessmen 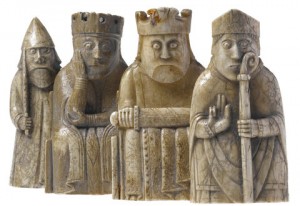 The Lewis Chessmen are the most famous and important chess pieces in history. They have a long historical and scholarly record, part of which is that they were made in Norway roughly 800 years ago. But now two Icelandic men are challenging that belief and trying to prove that the pieces came from their country.

The pieces were discovered on the Isle of Lewis, in the Outer Hebrides, Scotland, in 1831 — hence their name. Carved mostly out of walrus tusk, they were found in a small carrying-case made of stone inside a sand dune. There are different theories about how they ended up there, including that they were left over from a shipwreck or that they were stolen and buried on the island and then forgotten.

There are 93 pieces, including 8 kings, 8 queens, 16 bishops, 15 knights, 12 warders (fierce warriors that are the equivalent of modern rooks), 19 pawns, 14 tablemen for the game of tables, or backgammon, and a belt buckle. Some pieces are stained red, indicating that the colors of the sides were red and white, not black and white. The British Museum has 82 of the pieces and the National Museum of Scotland in Edinburgh has the other 11.

Scholars have studied the pieces since they were discovered and say that based on the style of their carvings they were made between 1150 and 1200 A.D., most likely in Trondheim, Norway. On Saturday, Sept. 11, there will be a conference on the Lewis Chessmen at the Scottish national museums timed to coincide with a tour of some of the pieces, called “The Lewis Chessmen: Unmasked.”

The question of the provenance of the chessmen may seem academic, even trivial. But scholars say their design, how they were created, who created them, even why they were made reveal important clues to the history and development of the North Sea region.

The two men pushing Iceland as the birthplace of the pieces are two chess aficionados, Gudmundur G. Thorarinsson and Einar S. Einarsson. According to a Web site created to explain his theory, Mr. Thorarinsson is a civil engineer and a former member of the Icelandic Parliament. Mr. Einarsson, a former president of Visa Iceland and a friend of the late chess champion Bobby Fischer, is helping to promote the idea.

They wrote e-mails to the organizers of the Scottish conference asking that the Icelandic theory be added to the agenda, but they said they were told the schedule had already closed. Still, they say they plan to attend and discuss the idea with scholars there.

Mr. Thorarinsson concedes that the idea of Iceland as the source of the chessmen comes from circumstantial evidence, largely based on the history of the development of the rules of the game and its pieces. In an interview, he said the most important clue was that the sets have bishops, which were not used in the rest of Europe at the time the pieces were made (the equivalent piece was often called a runner, and still is in Norway).

“The Lewis Chessmen are the only chess pieces found in the world then that have actually connected chess with the church,” Mr. Thorarinsson said.

Yet the use of bishops in chess, Mr. Thorarinsson said, is mentioned as far back as the Icelandic sagas from the 10th and 11th centuries — predating the chessmen. The sagas even include descriptions of checkmates using those pieces.

He also said that Iceland was the only country that used the word bishop at the time the chessmen were made.

However, Alex Woolf, director of the Institute for Medieval Studies of the University of St. Andrews, said that Mr. Thorarinsson misstated the historical record. “No one would claim that Norway or Iceland was the origin of the use of bishop,” said Dr. Woolf, who will be giving the talk “The Norwegian Empire, Fantasy or Fact?” at the conference. He said the idea of the bishop came from England, but “in terms of historical influence, this idea was transmitted rather quickly to Norway and Iceland.”

Dr. Woolf said that Trondheim, as Norway’s political and cultural center at the time, made sense as the likely source of the chessmen for several reasons.

The walrus tusk used to make the chessmen was expensive and the pieces would have had to have been made where there were wealthy patrons to employ craftsmen and pay for the material. “A hell of a lot of walrus ivory went into making those chessmen, and Iceland was a bit of a scrappy place full of farmers,” Dr. Woolf said. The pieces are also exquisite works of art, he said, adding, “You don’t get the Metropolitan Museum of Art in Iowa.”

He said that scholars believed that the archbishop of Trondheim, who, along with the king of Norway, had jurisdiction over the Hebrides, was probably the wealthy patron. He may have had them made as gifts, based on the cost of the ivory and the quality of the carving.

“What seems like the smoking gun is while they were excavating in the archbishop’s palace, they found a broken queen and it looks like it was broken before it was finished,” Dr. Woolf said. “It was the right period and the right style” as the chessmen.

That is not the only evidence. In a 2009 paper called “The Lewis Hoard of Gaming Pieces: A Re-Examination of Their Context, Meanings, Discovery and Manufacture,” two of the co-authors, Dr. David H. Caldwell of the National Museums of Scotland, and Mark A. Hall, of the Perth Museum and Art Gallery, also in Scotland, mentioned that on a visit to Trondheim they found carving work in the Nidaros Cathedral similar to work on the chessmen; they saw a wooden, kite-shaped shield that was recently excavated that was similar in design to the shields on some of the pieces; and they saw a king made of whale tooth, again of similar design, that was found on Hitra Island near the mouth of the Trondheim fjord.

They wrote, “We accept the long-established view that the pieces are Scandinavian, and see no reason to challenge a growing consensus that the craftsmen who made them may (mostly) have worked in Trondheim, Norway.”

Mr. Thorarinsson said that the existence of the other pieces and carvings did not rule out his theory. “The artists in Iceland, they studied in Trondheim,” he said. “They knew the carving style.” He said that most walrus tusk came from Greenland, which was settled by Icelanders, so it was possible that it could have been acquired in trade, particularly as Iceland is closer to Greenland than Norway.

Mr. Thorarinsson added that there would not have been bishops in sets commissioned by Norway’s archbishop. Around the time that the chessmen were made, there was a political struggle between the archbishop and King Sverre of Norway — in 1194 the archbishop convinced the pope to excommunicate the king from the church. “It is unlikely that the archbishop at this time is sponsoring artists to make pieces where the bishop is a servant to the king,” he said.

The bishop of Skalholt, Iceland, however, would have done just that, Mr. Thorarinsson said. “The grandmother of the bishop in Iceland was the daughter of the Norwegian king,” he said. “He would have found it most sensible that the bishop should be standing next to the king.”

But Dr. Woolf said that there were additional clues that favor Norway over Iceland. For example, the armor on the pieces are perfect reproductions of what knights wore at the time. “It looks like they had access to the real thing,” said Woolf. “Iceland didn’t have knights.”

In the end, Dr. Woolf said of Mr. Thorarinsson’s theory, “What he is arguing is not impossible, but a Norwegian explanation sounds more likely.”