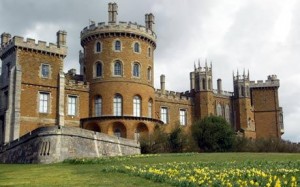 One of Britain’s best-known castles fell victim to a band of hapless Middle-Eastern “cyber-pirates” last week after they mistook it for a Crusader fortress of the same name more than 2,000 miles away.

Belvoir Castle, the family seat of the 11th Duke of Rutland, was mistakenly targeted by a subversive group of Algerian hackers who confused its website with that of Belvoir Fortress in Israel.

The hackers hijacked the castle’s homepage and replaced images of the stately home nestled in rolling Leicestershire countryside with a black page displaying the Algerian flag and a tirade against the Jewish state in Arabic.

Belvoir Fortress became a stronghold of the Christian military order of the Knights Hospitaller in 1168, when it was erected to fend off Muslim forces attacking the Kingdom of Jerusalem from the east.

It returned to Muslim control in the 13th Century, but was abandoned after a bloody assault by Israeli forces on the surrounding village of Kawkab al-Hawa in 1948.

By contrast, Belvoir Castle was a Royalist stronghold in the English Civil War and now holds an annual teddy bears’ picnic in its 15,000-acre gardens.

An Algerian subversive group called the Dz-SeC claimed responsibility for the cyber attack, which occurred on Friday afternoon, writing in Arabic on the castle’s website: “The cause of this hack is Israel’s presence.”

The message added: “Internet law does not protect the ignorant. Thank you to all the pirates of Algeria.”

A spokeswoman for the castle said: “We’ve nothing to do with the Middle-East. I just help to organise the teddy bears’ picnic.”

She added: “It does make more sense that they meant to target the fortress in Israel rather than the castle in Leicestershire.”

The frequency of such cyber attacks has risen in recent years, with hackers from a number of Middle-Eastern countries hijacking a range of websites in an attempt spread subversive political messages.

The Bank of Israel has been targeted, with hackers posting tirades against the Jewish state and its backers in the US.

The Crusader fortress of Belvoir is located on a hill of the Naphtali plateau around 12 miles south of the Sea of Galilee. It overlooks the winding Jordan River below and faces the hills of Gilead in Jordan.

Its defences were dismantled in the 13th Century by Muslims who feared the return of the Crusaders.

The fortress fell into ruins until excavations were conducted in the 1960s, unearthing the fortifications well preserved under masses of rubble. It has since been open to the public, and is considered the most complete and impressive Crusader fortress in Israel.

Alternatively, Belvoir Castle was built on an isolated spur of the Lincolnshire Wolds by Norman conquerers in the 11th Century and passed into the hands of the Manners family – the Dukes of Rutland – in 1523.

It became a Royalist stronghold at the outbreak of the English Civil War in 1642, but was torched by Oliver Cromwell’s troops in 1649.

The castle was later restored to its original plans, but was remodelled as a mock medieval castle in the 19th century by the fifth Duke of Rutland, whose wife did not take to the original Norman architecture.

Today, it is home to the 11th Duke of Rutland, David Manners. His son, Charles, is now the Marquis of Granby.

The house and its gardens are open to the public. Costumed guides lead regular tours of the state rooms, kitchen and bakery, and an annual fireworks show is held in the grounds, as well as the teddy bears’ picnic.