Taaffe Castle update: The time is nigh: I’m out of here

First Article: Crying out for medieval times in Taaffe’s Castle
Second Article: Gutted over skinned rabbits and cremated pigeon
Third Article: Two rabbits down – next, the pigs and non-laying geese
Fourth Article: My lungs are beginning to feel like they are covered in charcoal 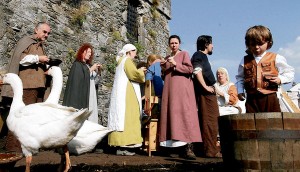 Rosita Boland says goodbye to Carlingford, her new family and her medieval life – she won’t be back in a hurry

There is one thing that has kept me going this week. Or to be precise – seven people. I could not have lasted life in the castle without my medieval comrades, who have made me laugh daily, and who turned 14 blind, forgiving eyes to the fact I hardly ever did any onerous tasks.

Alex Chavanne-Wallace (27) saved me from the rabbits. He skinned them and dealt with them. I owe him. “I like seeing if I can do difficult things,” he explains. “I’m a realist.” He’s found the week “a lot easier than I thought it would be”, and he did it because he hopes it will help get him a job in Living History – or indeed, any job. His one regret about coming to the castle is that it means he will miss his dad’s 60th birthday party tomorrow. So Happy Birthday from Alex, Yves Chavanne.

Panda for President. Panda for Taoiseach. I’m not sure if there is anything Gerard ‘Panda’ Terry (23) cannot do. This week, he has revealed he can sew, spin, fish, weave, light fires with a flint, make flatbreads, cook, make a lamp from fat, tackle rabbits and retain his good humour even when soaking wet. Without his skills and the kit he brought, our time in the castle would have been deeply unpleasant. He has a creative solution for everything.

“I haven’t found anything hard, to be honest,” he admits. He’s off to UCC to study archaeology and wants to do a PhD on early Irish grain in relation to yields when in competition against weeds.

Emma Downey (33) is the castle’s resident Sleeping Beauty, as she spends a lot of time asleep. “I don’t think I’m one of the vainest people in the world, but it’s just a bit weird to live without a mirror,” she reports. “I’ve really missed reading this week. It’s almost like I’m missing a limb.”

She wanted to come into the castle to learn about foraging; “how to make a low impact, or no impact on your environment”.

Johanna Woods (33) lives in Carlingford and the attraction of living in the castle for her was seeing her historic town from a different perspective. A nutritional therapist, she’s studying naturopathy and herbal medicine, and she has done the most successful foraging of any of us.

“I have a real love of herbs and nature, and of connecting with the earth.” Johanna has found wild carrots, samphire, sea spinach, horseradish, wild onion seeds, sorrell, dandelion leaves and wild mustard. “You could make a great dinner from what’s to be found on the shoreline alone,” she points out.

“I wanted to come into the castle because I wanted to find out artistically what the period looked like,” explains Dominic O’Neill (50). “I’m interested in creating the impression of history. It’s the visual side of it that’s so good – all the smoke and the fire and candles make the place look like an Eastern Orthodox church of some antiquity.” Dominic has lost his 21st century glasses since coming into the castle, and fears they are in our midden.

Tomás Skinner (19) revealed to me that he has a “new hatred of donkeys”, due to the fact he could never catch the one we were given to fetch firewood with. But he loved the rabbit-gutting. “If we had had time, we could have used every part of it,” he says wistfully. “You can use the brains of a rabbit for tanning. You melt them down, scrape the excess fat off the hide and rub the brains into it.” All I can say to that is praise be tanning hides was not something we were expected to do.

Bernie Levins (50) has charmed the public all week, taking them on tours around the castle, chattering away better than any professional guide. “It’s a skill in me I didn’t know I had,” she says. She wanted to come into the castle because for her it was a “unique challenge. I can’t believe how long the days have been – it’s been physically and mentally demanding,” she admits.

Eight of us went into the castle on Sunday, but on Monday, the honorary member of our “family” arrived. Barry “Viking” Gaynor, thank you for all your Vi-Kea kit, your patience and your stories.

The plan is to do this Living History event at Taaffe’s Castle again next year. This week I heard someone local suggest that in the future, castle residents seek sponsorship, as it’s an excellent opportunity to raise money for charity. It’s a great idea, but I can tell you right now, I will not be among those eight castle residents next year.

This is my final report from the castle. Thank you, Alex, Emma, Panda, Johanna, Bernie, Tomás, Dominic and Barry, for all the moral support. They are remaining on until Sunday, when it all ends. Come to Carlingford at 3pm on Sunday when they are “released” and cheer them on as loudly as you can, because, by God, they deserve it.