Great Hospital in Norwich could open to more visitors 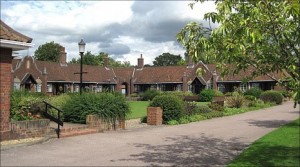 The current master of the 13th Century Great Hospital in Norwich is keen to open up more of the site to visitors.

“It’s a regret that not more people know of us,” said Mr Pellatt.

The Great Hospital was set up in 1249 by Bishop Walter de Suffield to look after the sick and needy clergy, but today it is a charity run by trustees.

“This is a very gentle place, a hidden gem behind the cathedral,” said Mr Pellatt, the 65th master of the Great Hospital and who ran operations at RAF Neatishead in north Norfolk.

“I really want to open up these wonderful buildings to more people, but we have to do that in an organised way that doesn’t impinge on the lives of the residents,” he added.

For more than 750 years The Great Hospital has been providing care and shelter for the elderly in Norwich.

But for many people, it comes as a complete surprise to discover it’s a thriving community based in Bishopgate, just a short walk from the city’s “club land” and within the shadow of Norwich Cathedral.

Alongside its medieval, Georgian and Victorian buildings that include a church, refectory and a hall, residents live in a variety of accommodation, from the 1930’s cottages that surround a manicured outdoor bowling green to flats located in the small medieval cloister.

The hospital’s trustees appoint a master to oversee its day-to-day running.

Mr Pellatt says balancing the needs of providing modern care and looking after the medieval buildings on the site is one off his biggest challenges.

“Care is a highly regulated business now and we do have to make sure we deliver legal care,” he said.

“We do have flats in some of the medieval buildings and they are very nice, but some of the people need to be slightly fitter to be able to access them.

“We have a £5m project that’s about to start where we’re going to provide more domiciliary care units. It gives us the ability to cope with a more aging population,” he added.

Initially set up to look after ageing priests, today The Great Hospital caters for everyone, but retains a draw for former members of the clergy.

As he came to the end of his job looking after the Julian Shrine in the city, he realised he had no plans for his old age – until someone mentioned The Great Hospital.

Father Phelan is well aware of the historical links that he’s helping to continue.

“In a small sort of way I feel it’s a tremendous privilege to be part of carrying on the original tradition,” he said.

“The cloisters were created for religious contemplation and it’s still like that here whenever I come through,” he added.

A highlight of any visit to The Great Hospital is the ornate Eagle Ward.

Tradition has it that the ceiling of the room was painted with more than 200 eagles in honour of Anne of Bohemia, wife of Richard ll, during a visit paid to Norwich in 1383.

She was the daughter of Charles lV of Austria – the painted eagles are thought to represent the eagles of the Austrian Imperial emblem.

Eagle Ward was where the female residents lived and after the last woman left in the early 1980s, the ward closed down.

Since, the trustees have preserved the room in its original state.

In the ward you can see the two room compartments where each woman lived and the furniture and belongings of some of the residents, including clothes, are still on show